A Visit From St. Nicholas at PG San Francisco ~ by Reinhard Cate

Twas the night before Christmas, when all through San Francisco PG, not a climber was stirring not even ‘EAC’. (Eliot A. Carlsen)

Ropes were hung from the anchors with care, in hopes that psyched climbers soon would be there.

The staff were bivvied all snug in their beds; while visions of shiny new gear danced in their heads.

The gym’s doors were locked, headlamps dimmed down low, I started my ride and prayed for no snow.

When out on the roof there arose such a clatter, I sprang from my bike to see what was the matter.

When what to my chalk caked eyes did appear, but a miniature sleigh and eight tiny reindeer!

He rapped down from the roof so nimble and quick, in astonishment I gasped, “That’s one jacked old St. Nick!”

He unclipped his ATC and ran over to my ride, I knew in a moment he wanted inside.

So nervous I started to stutter and shake, “Uh that’s no problem dear Santa your rope we can flake.”

Dressed in all fur from his head to his foot, he followed me inside leaving a trail of soot; 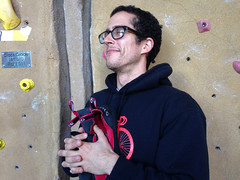 First Gus we awoke from his long winter nap,

each staff member should tell Santa what they want from his sack.

Anasazi Moccasyms for crack climbing topped off Gus’s list. So Santa took note, no presents would be missed.

Santa was happy with the inspiration from the big PG fam.

Jackie was nestled in with a sweet So-iLL boar brush,

while Justin was tucked into a bright crash pad that Petzl made extra large just for us.

But it was when Santa reached Stephanie he came to a halt, for it was her Christmas wish that nobody could fault. 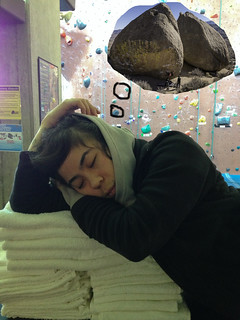 “I just want my body to heal so once again I can crush. My weekends can be spent in the mountains, so please it’s no rush.”

Santa smiled and promised some Christmas magic with care and we all hoped for healing vibes to flow through the air.

Our gear shop nearly empty Santa headed back toward his sleigh, he had houses to visit before the break of the day!

Outside he cheerfully clipped into his line with ascenders back up to the roof, I knew no one would believe me if I didn’t have proof.

I just wanted a selfie, but I was too slow. He was gone in flash, his sack of presents in tow.

But I heard him exclaim, as he jugged out of sight – “Happy Christmas to all, and to all a good night!” 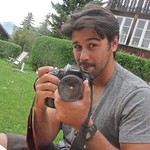