Our friends over at the American Alpine Institute have a great blog that provides of wealth of information.  Recently they posted an article about anchors and we thought you might enjoy the read.   They have posted many other great articles – be sure to check out their blog for more!  Thanks Jason!

The American Alpine Institute is a climbing school and guide service that operates in six states and sixteen countries. Since the company’s inception in 1975, the Institute has focused on climber education, with courses and guided ascents available to beginner, intermediate and advanced level climbers. The following article is from AAI’s award winning blog at www.alpineinstitute.blogspot.com. To learn more about AAI, log onto www.alpineinstitute.com.

Many climbers find the transition from top-roped climbing into leading to be daunting. This is especially daunting when the move is tinged with the possibility that you will have to build your own traditional anchor. It’s scary because at first it’s quite difficult to trust an anchor that you’ve built. It’s scary because maybe there aren’t that many pieces in the anchor or maybe the rock is bad.

One way to eliminate some of the fear and to build a more secure anchor is to build anchors “In Series.”In the past we’ve discussed SRENE and ERNEST anchors. The standard is that these anchors are built off of three or four pieces with a cordellete as in the following picture. 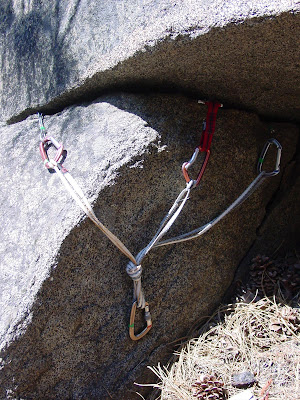 A Standard Pre-Equalized SRENE Anchor
The angles on this particular anchor are a bit wide between each of the outside pieces.

But what if it can’t?

When the pieces aren’t solid, you have to add more. To keep it simple, the best way to add more pieces is to add them in series. This is a method wherein one SRENE anchor is stacked on top of another SRENE Anchor. This system allows a climber to do a couple of things. First it allows one to add more pieces to the anchor. Second, it allows those pieces to be added in a simplistic way that makes sense with a cordellette or an extra sling. And third, it spreads out the weight at the powerpoint into more equalized pieces. 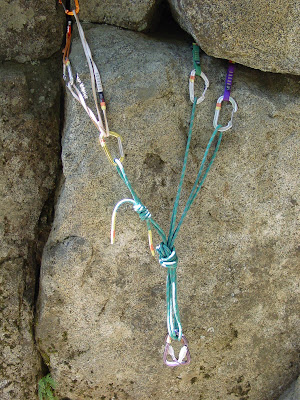 An Anchor In Series with a Magic X on the Left-Hand Leg
While the preceding picture may seem to tell the whole story, there is one thing to consider when building an anchor in series. One element that is terribly important to be aware of is that if a magic x (self-equalizing twist) is used in the system, it may not be as effective as a pre-equalized knot in the system.

In the picture above, the left hand leg of the cordellette terminates in a sling clipped to two pieces and equalized with a magic x. The problem with a magic x in this kind of system is that if one of those left hand pieces blows out, the sling will become limp and the weight will not automatically transfer to the other piece in the magic x. If this happens, then all of the weight will be placed on the two pieces on the right.

It’s better to build two pre-equalized anchors on top of each other when working in series. However, occasionally this isn’t possible and you’re forced to work with a magic x. When that happens, make sure that the pieces that are not a part of the x are extremely strong. 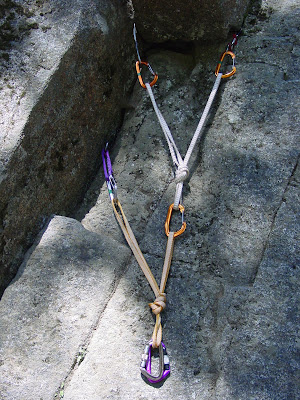 An Anchor In Series with a Pre-Equalized Knot on the Right-Hand Leg
This anchor is essentially a three piece anchor that was linked together in series
because the climber only had two double-shoulder length runners to build an anchor.
It is quite possible to build a vast anchor with codellettes and slings in series. And sometimes — when the rock is very bad — that is exactly what you have to do.

There are many other ways to add additional pieces to an anchor and to keep it SRENE, but for many who are just dipping their toes into the world of leading, anchors in series make a lot of sense. Most guides recommend that beginning level leaders work with anchors in series for a significant period of time before experimenting with other systems. This will help lay a solid intellectual framework of what an anchor is supposed to look like and what it is supposed to do.