Dan approaching the real climbing on the traverse to Lyell. Photo by Evan Pearce.

4:50am:  “Good thing we set two alarms…”  The first alarm failed to go off, but the second got us up and moving.  Unfortunately the sky did not look as friendly as it had in the earlier morning hours during our biological excursions.  A few stars were visible here and there but large stretches of the sky were an ominous, blank, black.  Despite this portentous sky we packed our things, choked down a quick breakfast (I managed half a bar) and hit the trail by headlamp.

Dan was in the lead, setting a brisk pace up to Donahue Pass from our camp, where the JMT first crosses the Lyell Fork of the Tuolumne on the way down to Lyell canyon.  We headed back up the trail we had descended the day before, and our headlamps were quickly unnecessary.  We reached the pass in time to be treated to a beautiful sunrise, that set aglow the clean granite slabs which made up the start of our ridge traverse. 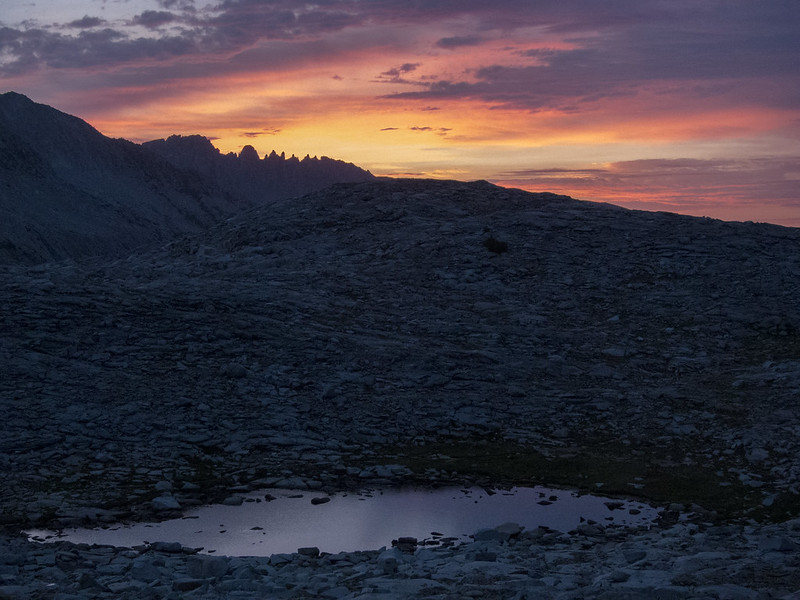 Sunrise at the start of our traverse of the East Ridge of Lyell. Photo by Evan Pearce. 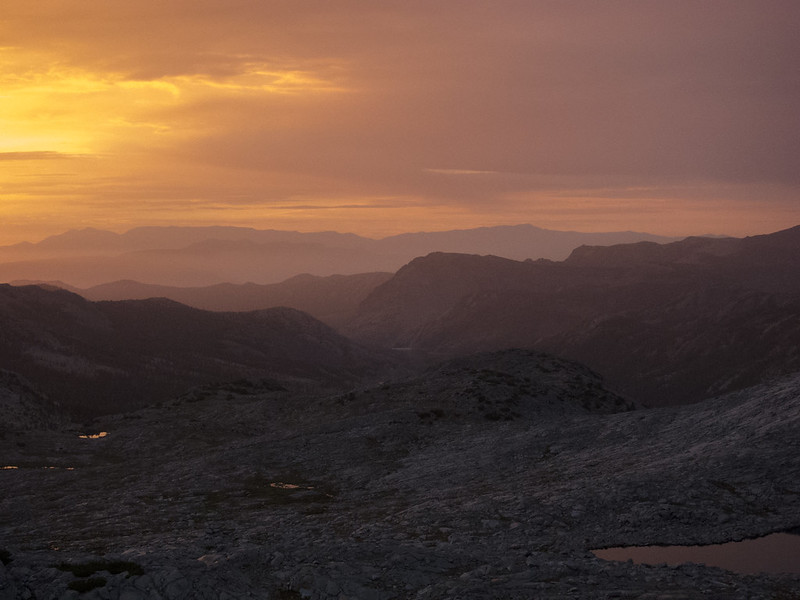 After a bit of easy slab walking, we got our first close up views our goal for the day:  The Full Northeast Ridge of Lyell.  We knew little of the terrain ahead of us; guidebooks were unhelpful and internet searches fruitless.  In our heads, the traverse was broken into sections by the descriptions we used to point out the various features to each other while staring up at the ridgeline from camp the evening before.  The Sharks Fin, The Mystery Meat (a truely prophetic name), THE Gendarme.

Morning light on the traverse from near the start. Photo by Evan Pearce. 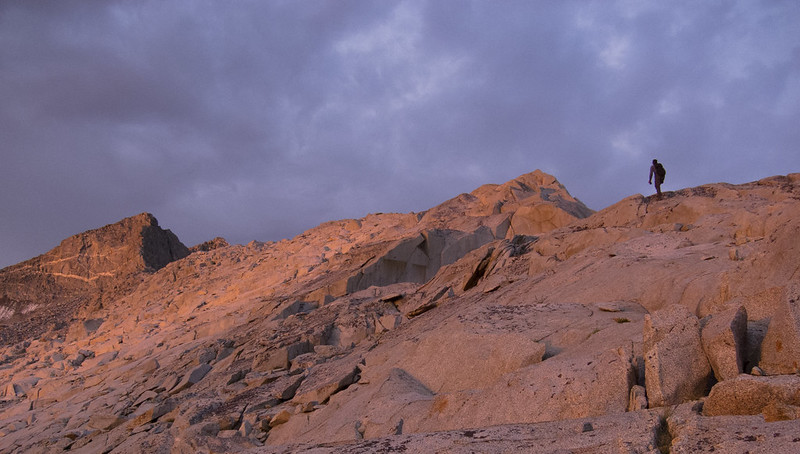 On the approach to the East Ridge of Lyell. Photo by Evan Pearce.

Despite the excitement of pulling ourselves up to the start of the traverse and getting ready to set off into some unknown climbing, the sky remained threatening.  We began the climb up the initial steepening ridge, with barely a pause to collect our thoughts.  Dan climbed like a madman and I could barely maintain contact with him, and at the same time keep my heart rate low enough to avoid passing out.  Turns out that Dan was more than a little worried about the weather and he was gunning to complete as much of the traverse as he could before the rain moved in on us.  And his concerns seemed fully justified as we topped out the immensely fun climbing on the initial section of the ridge.  The joys of cruising up super solid low fifth class Sierra granite were quickly replaced in my heart by dismay, as it was clearly already raining hard to the south and west of our position.  My dismay was due less to a potential forced retreat from the ridge, but more about the knowledge that it was only a matter of time before the rains reached us, and that meant Dan was going to kick it into an even higher gear.

We took off along the ridge, heading across relatively easy terrain towards the Shark’s Fin.  At one point, there was a steep, relatively blank drop off on the ridge, which forced us to down climb a loose chimney off the left side of the ridgeline and then traverse 40 or 50m back to the ridge and the start of the Shark’s Fin.  This feature provided more excellent rock and climbing that passed in blur of breathless joy, as I fought to stay focused on my climbing and keep moving quickly and efficiently.  I have no photos of this portion of the climb because we dared not stop.  It was clear that the rain would begin at any moment and we both had a strong desire to reach a portion of the ridge with a known descent route. 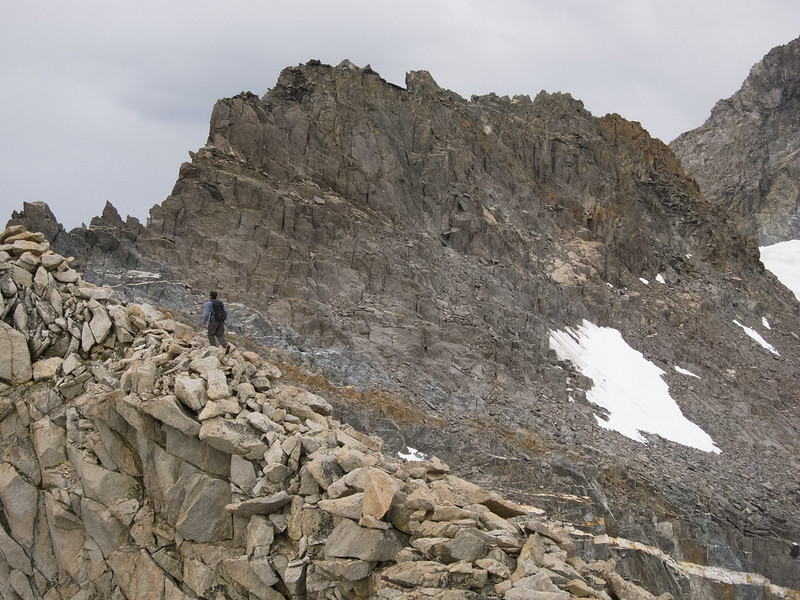 Dan on the traverse with the “Mystery Meat” in the background.

From the top of the Shark’s Fin we traversed passed a few gendarmes and reached the start of the “Mystery Meat”.  From our camp this had looked to be the worst rock of the traverse, and we were fully justified in our assessment.  What we did not anticipate was that this section of the ridge would also be the sharpest, with a knife-edged ridgeline constructed of thin plates of metamorphic rock set together vertically and at a diagonal.  It was much like climbing across the top of display of flatware at Bed Bath and Beyond.  In discussion the previous evening, Dan thought the Mystery Meat would take us “either 10 minutes or an hour.”  It might have taken us an hour if we had had the luxury of clear skies, but we passed it as quickly as we could.  I managed to mostly swallow my fear of the loose plates I was climbing over and around, although more than a few curses escaped me as rocks shifted in hand and under foot. 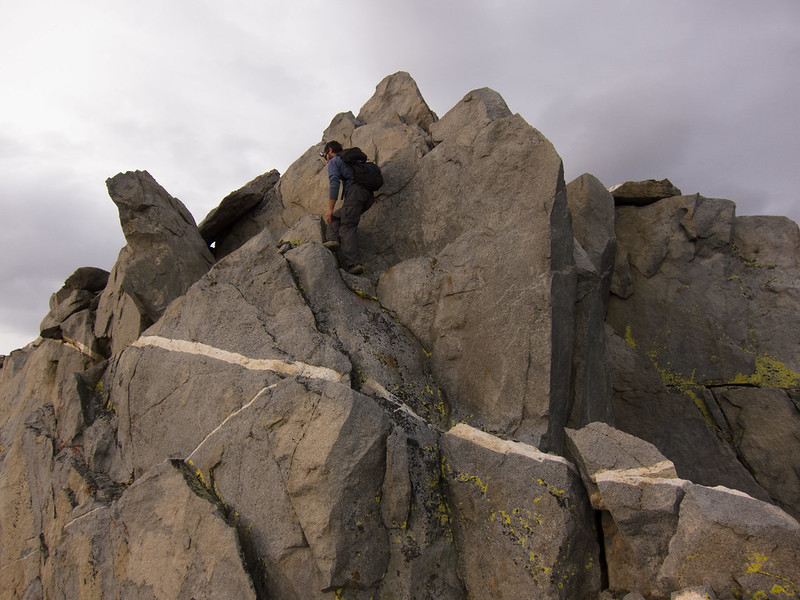 Dan on some of the low 5th class climbing on the start of the traverse to Lyell from Donahue. Photo by Evan Pearce.

Once passed the Mystery Meat, it was not far to THE Gendarme.  We traversed along some ledges just underneath this feature aiming for a way up to the notch in the ridge just after THE Gendarme.  However, from our vantage point the rock up out of the notch looked steep and blank and we were just about out of time, as a couple scattered raindrops were detected.  We considered descending to the talus below and traversing to the solid and obvious ridge coming up from the south (described in the East Arete from Marie Lakes), but we were far enough above the talus to make this unattractive.  We headed instead for a series of ledges that seemed to link up to produce a route up the central gully of the SE face of this peaklet.  As we moved up into this ledge system the sky finally committed to some steady rain. 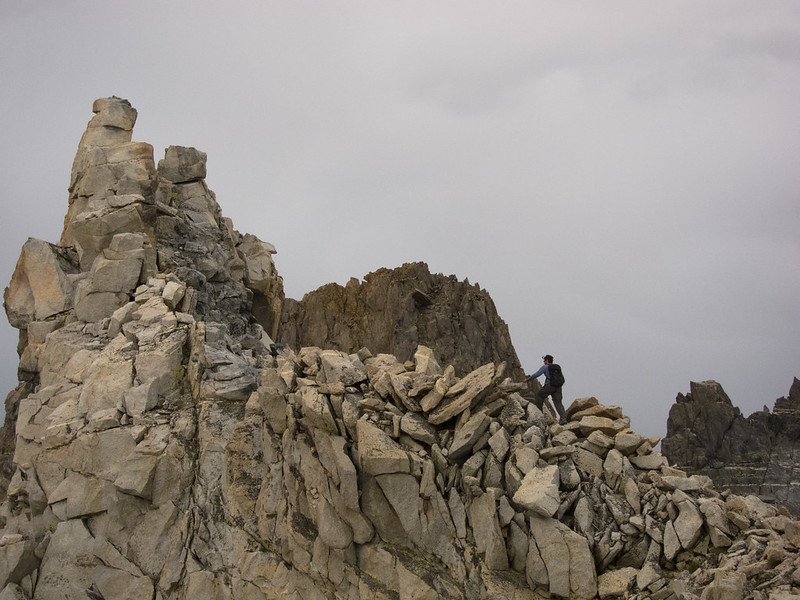 Dan negotiates a particularly interesting looking section of the ridge with ominous skies behind. Photo by Evan Pearce.

We took slightly different routes up the gully but both pulled moves we admitted that we did not want to downclimb on wet rock.  We looked over at each other along the diagonal ledge that we had both reached from our disparate routes.  At Dan’s behest, I moved out to left/downhill end of the ledge to see what happened after the ledge went around the corner and out of the central gully.  The ledge continued but only around to a notch in the next arête over.  The terrain beyond that point was still unknown, and I turned back to Dan without feeling too excited about our prospects for continuing in that direction.  As I looked back at Dan from my new point of view, I discovered the real meaning of a “thank god” ledge.  I saw that if we ducked under a little overhang and continued along our ledge it would take us all the way out to the ridge crest and hopefully into easier terrain.  I told Dan that the ledge looked like an escape route, and he gratefully took off to explore.  I followed along behind and after a few tense moments heard the sounds of mingled elation and relief from above, as Dan pulled a few class 4 moves up on to the top of the ridge.  From that point, we were once again in territory with escape options, and most importantly, escape options that were feasible in the steadily increasing rain.

After a brief discussion, we decided to continue on the through the rain as far towards the summit as we could.  We had come most of the way along the ridge and the climbing looked easy enough to be safe.  As we moved along the ridge, the wonderful white Sierra granite reasserted itself as my favorite flavor of rock.  Somehow those beautiful hunks of white rock stayed grippy and secure as things got wetter and wetter.  Unfortunately, Mt Lyell is not composed solely of the lovely white stuff, and there were more than a few sections of treacherously slippery metamorphic blocks that had to be climbed over very carefully.

We didn’t stop to look at our watches during this time, so I have little concept of how long  we climbed through the storm to the summit.  I do know that at some point during the climb the rain turned to snow, which, was kind of awesome.  Both for the fact that we got a little less wet, and because it is just damn cool to be up in the mountains in that kind of weather.  We maneuvered past the few remaining obstacles and soon found ourselves on the summit, damp and elated.  After a few happy moments looking around at the view and the clouds we checked the watch and to our surprise it was just after 9AM!  If we had been moving that fast, I guess I had good reason for feeling like I my heart had been pounding for hours. 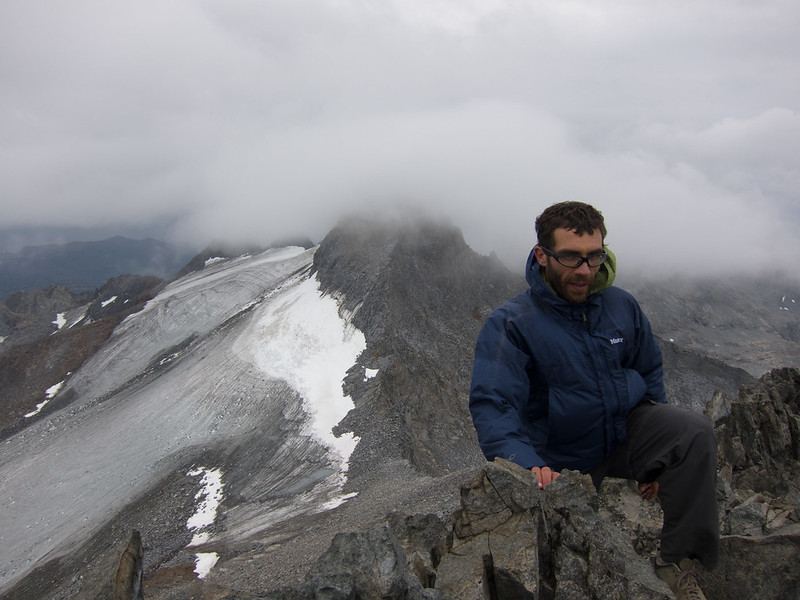 Dan topping our Maclure on our traverse, with the summit of Lyell still draped in clouds. Photo by Evan Pearce.

We lingered for only a little while before heading down to the Lyell-Maclure col, where I talked Dan into tacking on a quick run up to Maclure since I had never been up there.  The rain and snow had trailed off during our descent from Lyell, so he agreed and we had a fun stroll up to the summit, leaving our packs behind at the col.  A pretty strong breeze was blowing up from the basin below us, and by the time we made our way down from the summit and began the descent, most of the talus and slabs were fairly dry.  We made good time and were back at our tent at noon, in time for a big lunch.

For a cool video of their summit shot by Dan, check out this link here! 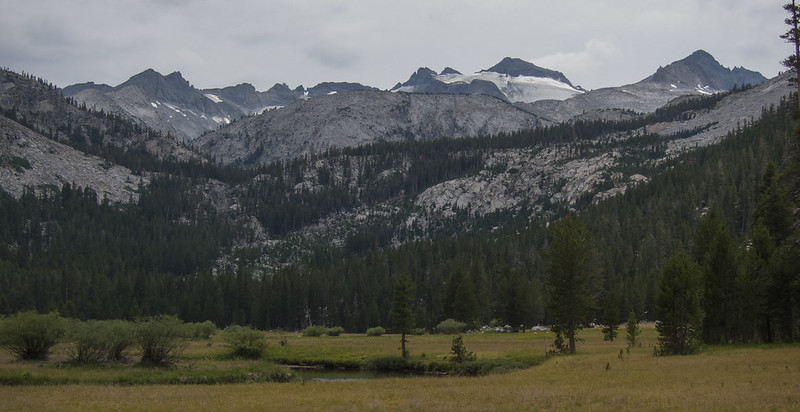 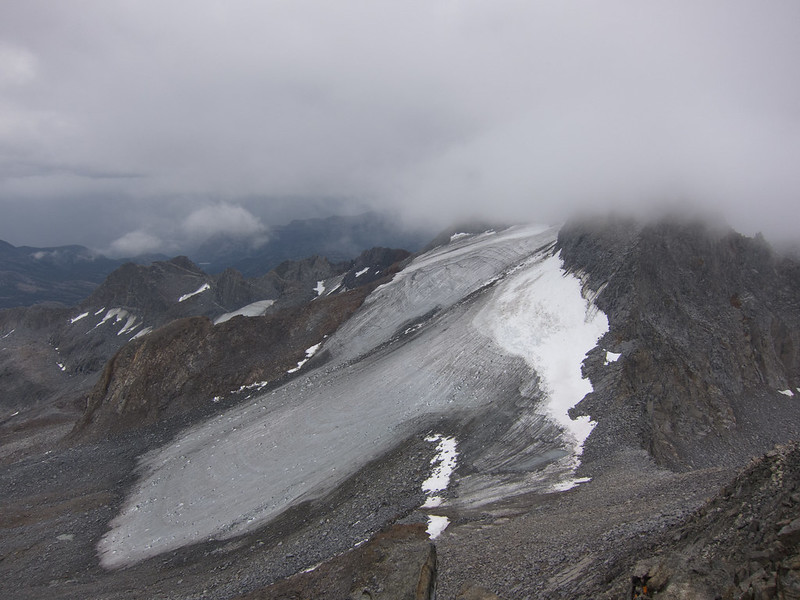