Falling and Commitment One Month On: A Look at Lessons Learned at the Warrior's Way Clinic 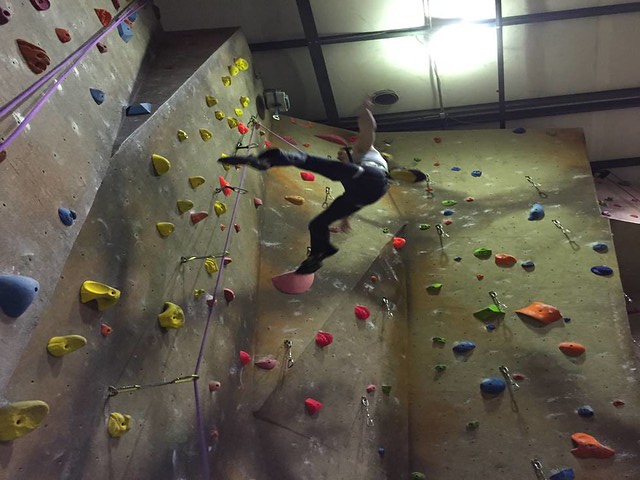 Sooner or later, every climber gets asked the same question:

While we all have different ways of answering that question, they all amount to the same basic response:“Well, yeah. Duh.”

Of course we enjoy it, but that doesn’t mean that we aren’t challenged by it. For many climbers, fear verges on omnipresent, lurking in the backs of our minds regardless of the route’s grade, exposure, or commitment level.

Success is often determined not by raw strength and stubbornness, but by our ability to maintain poise and grace under pressure.

The bad news is that there is no shortcut to mastering fear. Take the example of Simon Prochnik, a member at Planet Granite who recently attended Warrior’s Way Falling and Commitment clinic taught by Jeff Lodas:

“I’ve been climbing for nearly 20 years, indoors and out. I hit a plateau with leading. I was just terrified of falling. I needed a completely new way to get past my block,” Prochnik said.

There were no easy solutions offered to Simon in his time taking the clinic. Rather, the goal was for each student to learn to recognize fear as another aspect of our climbing experience, as controllable as body movement and rope management. 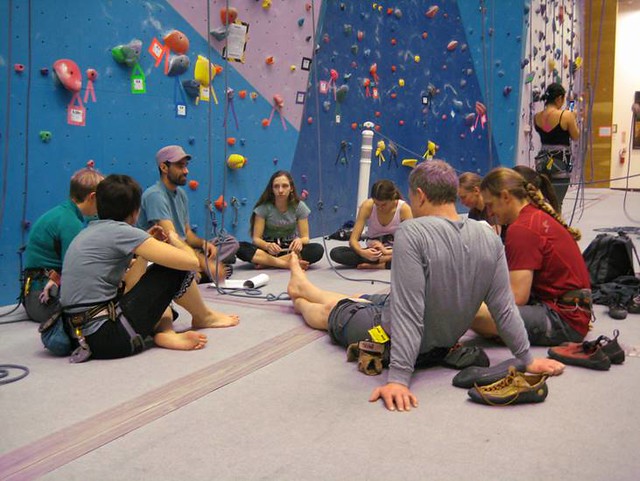 Your author also had the pleasure of attending the Warrior’s Way, led by Lodas, who exudes the presence of the archetypal climbing instructor. Part warrior, part Buddhist, and part dirtbag, he exhibited the kind of calm of someone who has probed the depths of his own mind and has a great deal to share about it.

“I’ve always been interested in the mind, even from an early age,” he said. “I started climbing, and after a few years I realized the potential climbing has as a laboratory for mental training.”

The first half of the clinic dealt entirely with falling. It built incrementally, starting well within our comfort level. Lodas gave us things to practice while a fall is in progress.

By attentively falling again and again,
we began to discover how a proper mental approach
can change how scary a fall feels,
or how unpleasant the inevitable swing
back into the wall will feel.

If the first half was devoted to mental training, then the second was almost entirely to the physical. Lodas instructed us to climb as intuitively as possible. See a hold, grab a hold. He demonstrated how the eyes look naturally to the places where our body most instinctively sought balanced movement.

The mind and body act in concert and often in opposition. They are yin and yang. Sometimes, mastery of the mental side of climbing involves silencing the inner monologue that often leads to hesitation, half-hearted commitment, or exhausting mental coinflict.

Lodas suggested we try to divide our climbing into periods of movement and non-movement. When resting, for instance, we would allow our mind to survey the climb and inform our next course of action.  Look down, look up, consider the risks and the objective, make a decision, and go.

Allow awareness of the fear, rather than deny it, but delay reacting to it. Climb as though it wasn’t there, and pause to reconsider the consequences at the next rest. Trust your mind to create a plan, and see that plan through to the end.

If this is sounding like something out of a corporate team-building exercise, or a Boy Scouts’ ropes course, that’s because these lessons inhabit a realm far larger than that of a rock climb.

“Mental training is not just about climbing – it’s a way of life, and once you start observing your own mind, you don’t stop just because you untie from the rope,” Jeff Lodas said.

He recently worked with Arno Ilgner, founder of the Warrior’s Way and Desiderata Institute, to expand the curriculum to a non-climbing audience. It’s easy to see how some of the curriculum (look down, look up, for example) might lend itself to a more universal theater (look back, look forward). 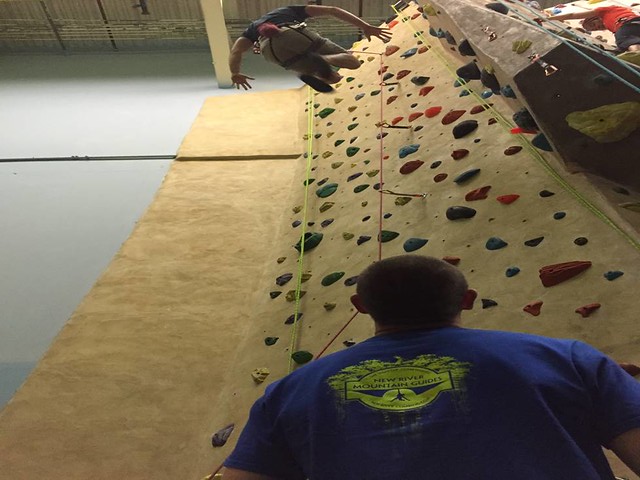 Part of why we climb is tied up in how we feel when we aren’t climbing. We feel more confident. We feel more at peace. The lessons we learn at the gym or at the crag reverberate throughout our professional and personal lives.

“What you learn there is directly applicable at all times,” Jeff said, reflecting on his own climbing experiences. “Whether it’s the learning process itself, how you can act effectively in stressful situations, how attention can transform fear, finding out what your motivations are, or noticing and unlearning the negative habits of the mind.”

Looking back on the clinic, one month later, I have not suddenly become a fearless leader. Neither has Simon:

“It’s a work in progress, but I can see that every fall I take gets less scary. This means I can spend energy focusing on the next move instead of worrying about what happens.”

There is no magical panacea to the fears and doubts that nag us.

Each fearful encounter is more familiar than the last, allowing us to develop our ability to focus attention under stress.  Our management of it becomes more efficient as we are able to respond intelligently rather than react.

The beauty of the Warrior’s Way clinic lies in the almost zen-like mantras that you are left with, words and phrases that seemingly pop into your head when before you might have been floundering.

The mind becomes quiet and a familiar script fills the place of confused thought:

Planet Granite hosts the Warrior’s Way Falling and Commitment clinic twice each year, open to all lead-certified members. Jeff Lodas and the instructors of Warrior’s Way also host multi-day clinics at climbing areas in California and elsewhere.  More information can be found at jefflodas.com.  Images in article courtesy of Jeff Lodas. 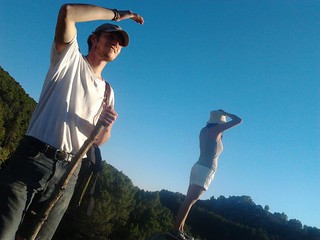 Since high school, Michael Adamson has been climbing rocks of all sizes ranging from tall to not as tall. It is also rumored that he enjoys the occasional bubble bath. When not at Planet Granite, he can be seen in his natural habitat walking the mercurial line between mischief, bravery, and stupidity.