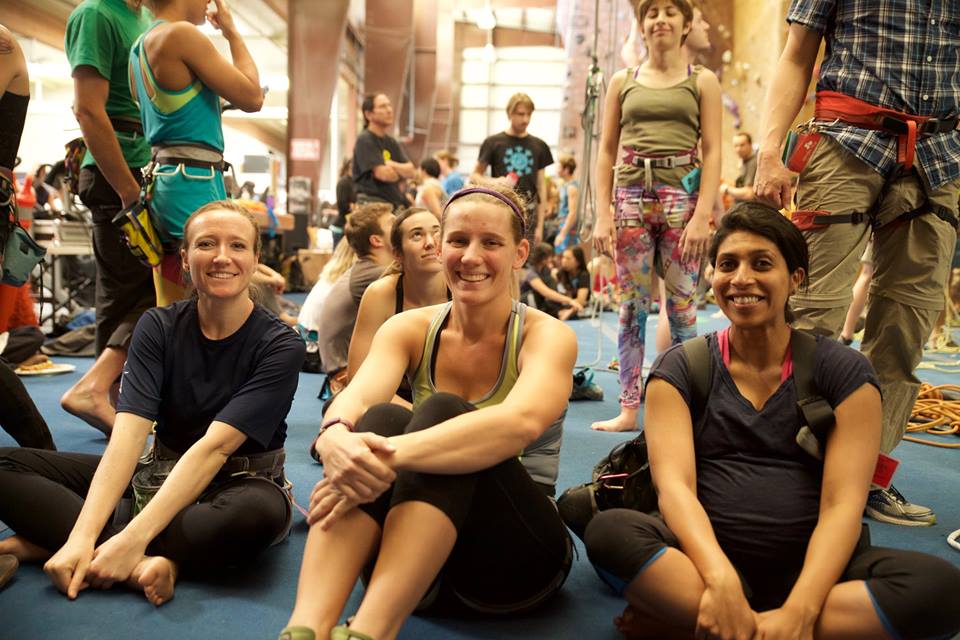 Day in and out, week after week, we climb for ourselves and with our friends.  But twice a year it’s time for a party, for a comp, whether that means Bloc Party bouldering or Friction Series’ stoke on a rope.

Then it’s time for yelling a little more than normal!
A time for butterflies, for only one shot at sending a route before you go to the back of the line.
A time for cheers and applause!
Time to watch the raddest climbers from our gyms face off in the ultimate battle: an onsight Finals for cash and serious bragging rights.  Here’s a link for results from every Friction Series event this year, including Sunnyvale.

Climbing thrills beyond the everyday

“I’m excited to see how many routes I can put up,” said PG Sunnyvale member Ted, stretching out at the beginning of his first climbing competition.

A stream of climbers poured into Planet Granite Sunnyvale for the final installment of the Friction Series. By midday, as lines of stoked climbers took turns assaulting creative new routes, Ted was loving the comp experience.

“It’s awesome! There are tons of new routes, and it was cool watching people climb things they’ve never seen before, and people cheering each other on.” 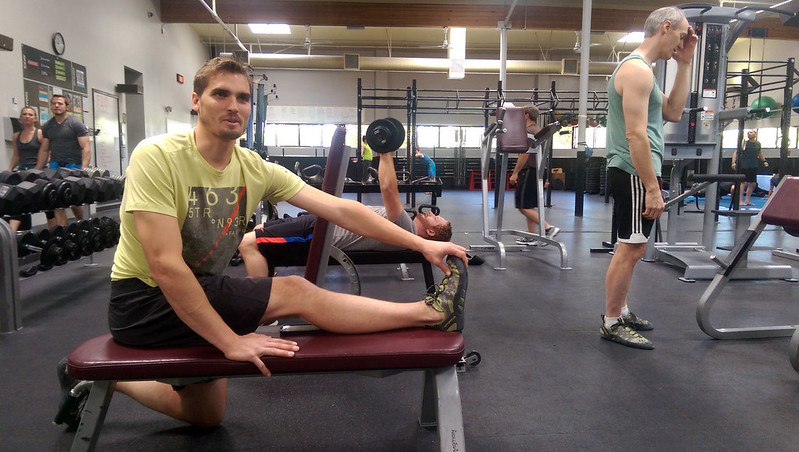 As usual, the biggest crowds gathered for the hardest routes to send.  Planet Granite youth Team members fought the toughest routes on lead, along with pros like Josh Levin, also a longtime PG member, and members of Stanford’s climbing club who came to throw their hats in the ring.

“It looks like getting over that roof after the eighth draw is difficult,” said SV member Lisa, watching PG youth team member Connor Herson battle his way forward. 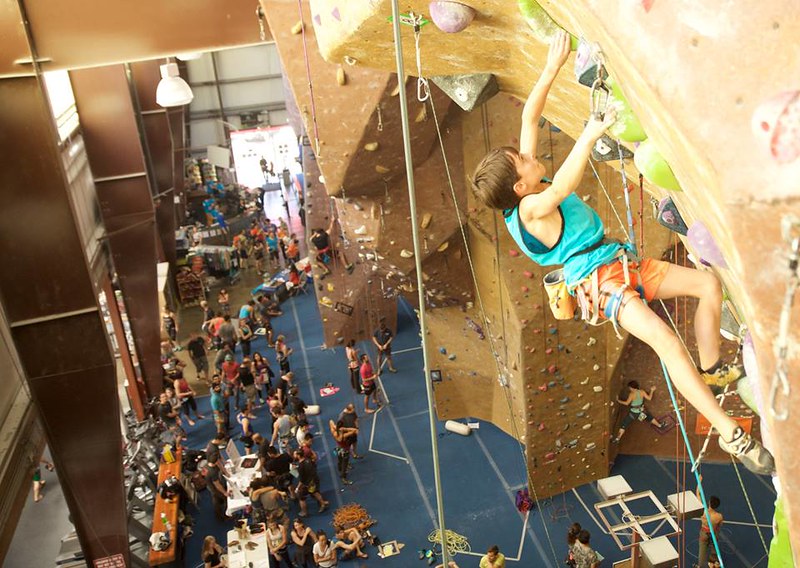 Sombrero-adorned emcee Riley employed his most honey-coated tones of voice, channeling a reassuring 1950s radio announcer as he introduced climbers to all the great sponsors on hand:  Icebreaker, the merino wool specialist, was proud to educate people about the high quality sheep they had shorn.

Bay Area Climbers Coalition invited those present to help out with a crag cleanup on May 22.  The North Face had great swag including coveted tiny metal mugs with real carabiner handles! Note: mug carabiner not intended for weight-bearing climbing use.

Climb 25, a purple route along the row of exercise machines by the Sun Wall, was the hardest climb in the comp, and it could fairly be called a Purple People Eater.

One confident climber after another clipped and climbed up the arch of the route to the second box, before swinging off wildly into space as cheers turned into a chorus of “Awwwww’s” from below.

Then came Solomon Barth, a member of Stanford’s climbing club, attempting the route again after earlier falls.  When he reached the second box, the dyno was almost immediate, and he stuck it, to yells from the crowd that were only exceeded by the shouting when he hit the finishing hold barely a minute later.

“The second box, the feet were kind of awkward,” Barth explained. “I had tried to heel hook, and it popped off.  This last time, I just went for it.” 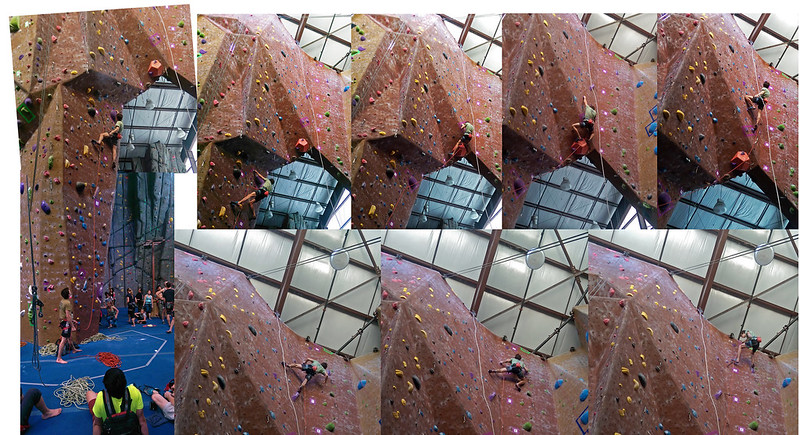 He cruised through the final section, and the crowd in the back of the gym cried out in excitement.  The send would prove to be the only one during the comp, and it qualified him for…the Onsight Finals, which would choose the overall Friction Series winners for 2016.

First up for the women was Alex Plotnikoff.

“You got it Allie!  You got it!” the crowd cheered as she dangled from feature-mounted holds on an overhanging roof. She retraced her steps to switch hands and try a different approach, deliberatively repeating her path.  Then she succumbed to a dyno and a strong round of applause rewarded her. 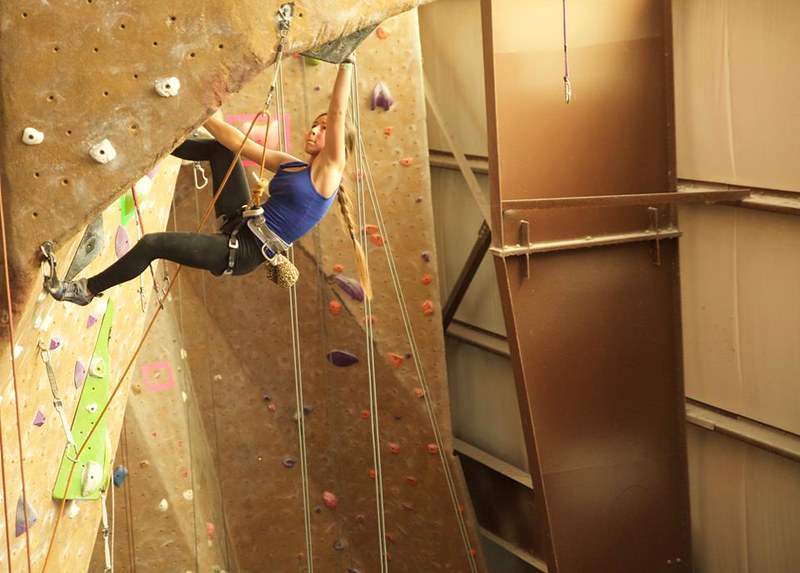 Ross Fulkerson, also a hometown favorite, had the crowd yelling their approval.  Midway through the route, he found holds like gray elephant appendages springing forth from a yellow honeycomb feature.  Like Alex, he traced back and forward again to find the right approach to a tricky dyno.

“One minute warning!” was shouted, spurring Ross close to the top before a strong lateral move threw him and brought down waves of applause.

High and mighty dynos were the first defense the routes offered, and the field narrowed in the face of those challenges.

Next up for women, Sam Linden threaded along a path of stingy white holds until the crimpy path off the roof was hers.  Then, just when the route seemed to relent, the sparse crimps evaded her and she fell.  The crowd never relented in its applause for these persistent and able finalists. 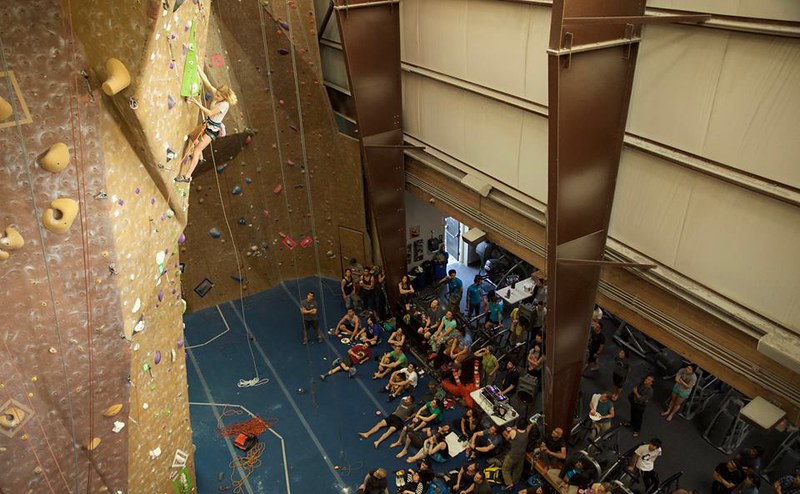 Sam McQueen took his turn, starting the men’s black route with an easy dyno tour of the first sequence.  Next trick? Sam employed a half-bat-hang rest at the yellow honeycomb feature, considering how to wrestle it before a static move far to the right to stick  the precarious lateral move.

“Come on Sam!”s bubbled up from the onlookers like gasses venting in a tropical swamp.   Again, came the one-minute-left call, and again, a few shakes preceded a fall.

The problem confronting the men:  just after the overhanging sequence of the black climb ended, a set of tough, uncaring holds greeted those who sought to unlock the final sequence.

“Tiny indent,” “Rip-sloper,” and “Horrible” were a few of the words those in the crowd used, as they contemplated the firewall defending the end of the route.

Meanwhile the women were still taking turns with their own conundrum: the crimpy white sequence after a stiff roof, which never got any more generous.

Kara Herson reached the crimpy lip and threw a heel.  Then she threw another and shook out her hands before ascending the final crimp sequence.  Just before the final overhang leading to the end of the route, she reached her limit.  Again, the crowd roared approval for her valiant attempt. 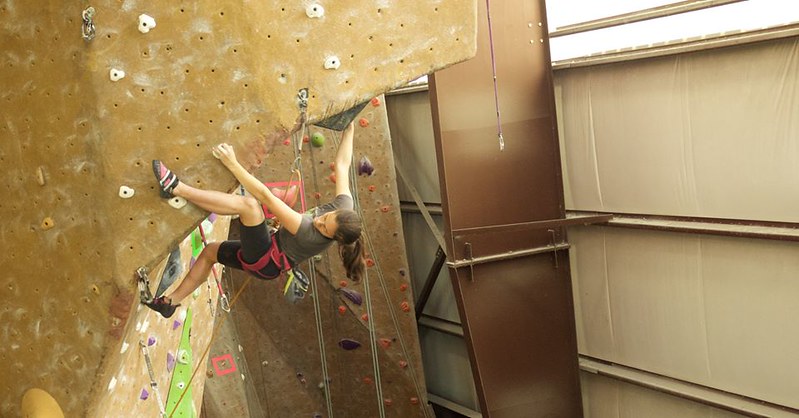 “Solomon was the highest men’s scorer today,” Riley intoned, as the crowd stirred in anticipation.

Early on he promised efficiency, clipping two draws from one perch.

He called for time from the official keeper: 2:15 was his answer.

His feet lead the way through the lateral moves, and he grabbed a baby elephant trunk as “One minute!” was shouted up.

“You can do this!” a child’s voice cried out, followed by an adult’s insistent “C’mon man!!”

Barth grappled with the horrible final holds, and reaching high, clipped to a wave of applause–but as he rappelled down, the scorekeepers made clear, he stuck the final hold and then came back to it–only securing it after time had expired. 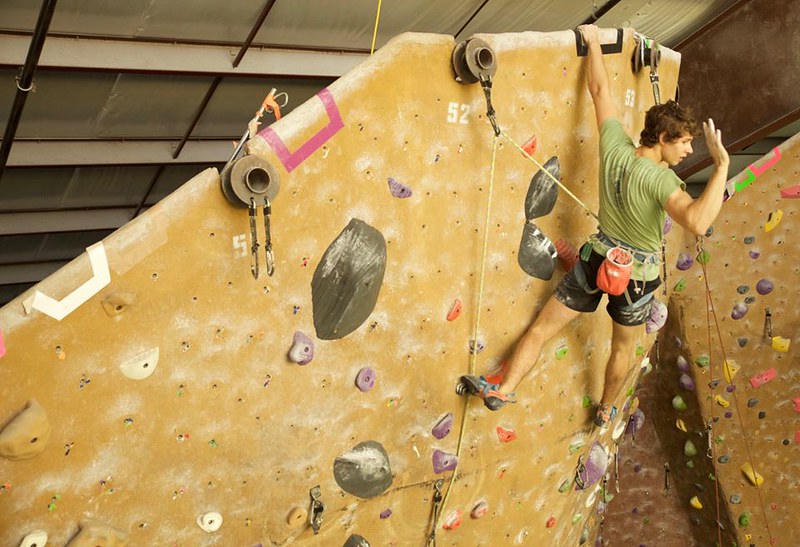 Madison Cline, the final woman, took her shot at the crimpy white journey to cries of “Let’s go Maddy!!”

Quietly she got to work, cruising through the moves, with periodic swells of applause overlaid on a steady 120 beats a minute from the DJ table.  She cruised the crimps with apparent ease, and above her, two white slopers on a black feature, like pure alabaster angel wings awaited.

Alas it was not to be–Madison rose higher than any other woman, but couldn’t finish the route. 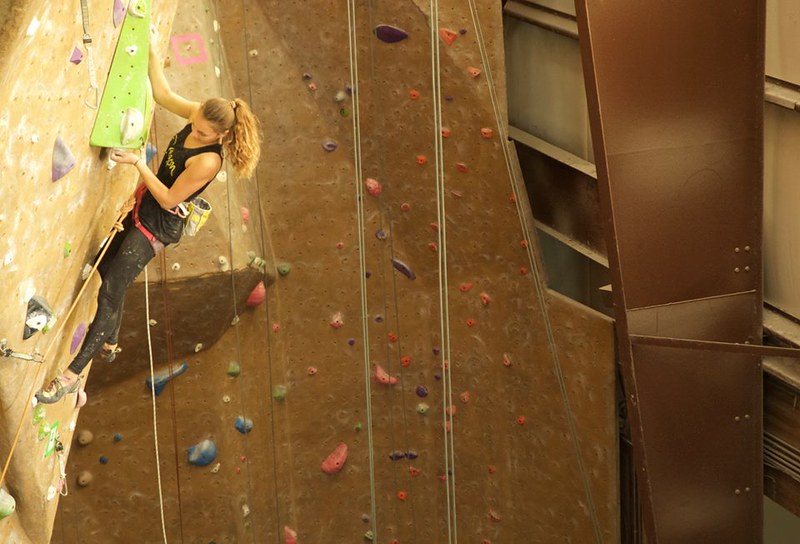 Would a man be able to send the black route and wrestle its gray elephant trunks in under three minutes?

Josh Levin, soon-to-be-Ninja Warrior, would do his best to be that man.

He had a taste for theatrics: black hoodie on his head he tied in, rocking from foot to foot like a prizefighter.  Before stepping to the wall, he raised his hands, calling on the crowd for a round of applause it gave him gladly.

“That’s our boy from the Santa Clara gym!” someone in the crowd shouted. “Welcome back!”

Josh climbed with power, sweeping through the initial moves and then leaping with a full dyno for the elephantine holds on the yellow feature.  Nailed it, legs swinging, crowd oo-ing.

Then he employed a lengthy rest on that yellow feature, resting his arms, waving to the crowd upside down, before finally returning to business.  A long rest helped Josh in winning the Belmont Friction Series, and it paid off again.

When “One minute!” was called, Josh was still a handful of moves from the end, but he chalked, once, twice, three times and leapt through the final moves without hesitation.  He nailed the final hold and clipped before fist-pumping and slowly being lowered to a high-fiving and fist-bumping crowd below. 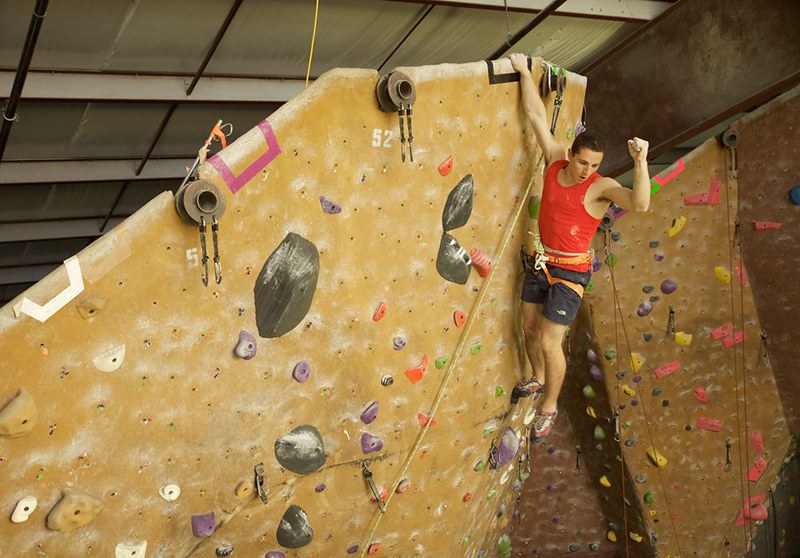 A huge thank you to all who competed and made each event in this year’s Friction Series memorable.  Planet Granite is built on its community, which is only possible because of you, our members, who bring excitement and passion to our comps and other events.

To see more photos from the event, visit our Facebook gallery.

Also, one final thanks goes to the terrific sponsors of Sunnyvale’s Friction Series: