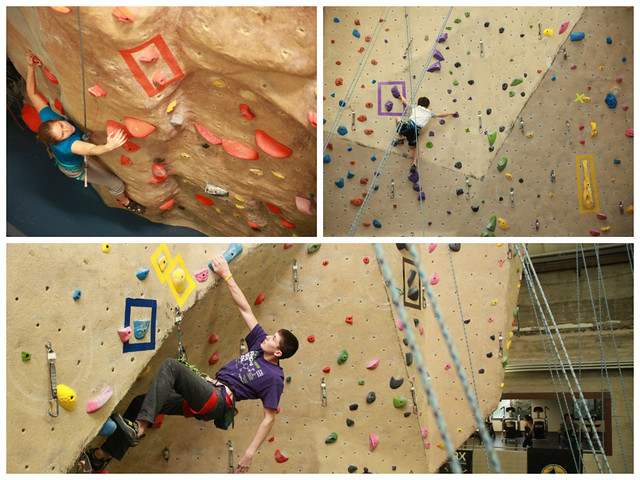 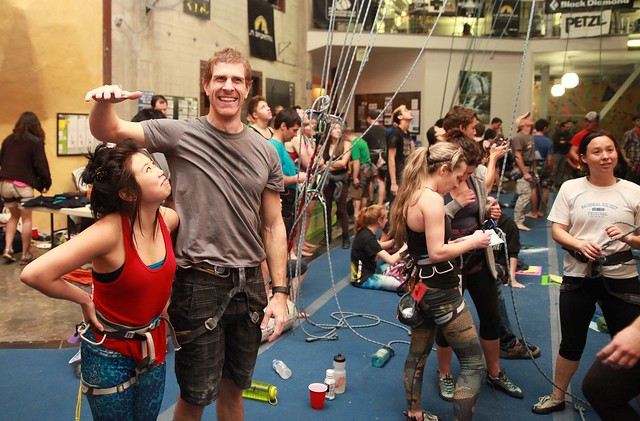 Climbers of all ages, abilities, experience levels, and even heights came and crushed at Friction Series 2015 in Belmont!

Friction Series 2015 opened with a great night at PG Belmont! We had lots of prizes, cool routes, a fun atmosphere, and most importantly a huge turnout of psyched climbers, guests, and staff. Although I was a little sad at first to be working instead of climbing, in the end it turned out to be a fantastic experience which I would not have had any other way. Talking with competitors, vendors and staff was so inspiring, and once again makes me thankful to be a part of such a cool community. 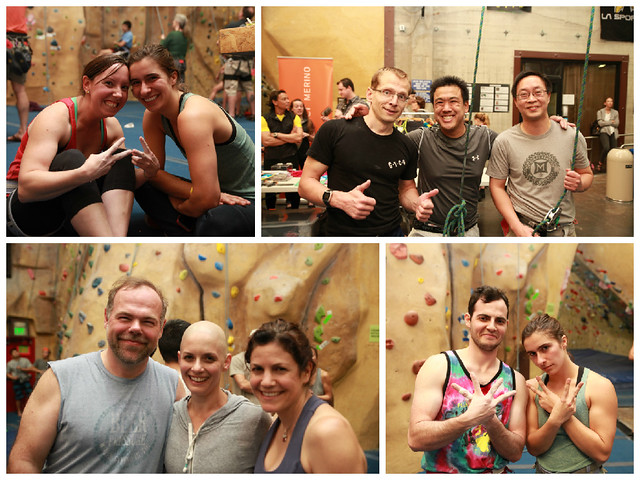 One of the best things about working at Friction Series is that everyone is happy to be there. Whether they are Belmont regulars, visitors from other gyms, off-duty staff, or even vendors tabling at the event, everyone was smiling that night.

As I wandered the gym floor taking notes for this blog post, I discovered a problem: With such a diverse group of climbers and event facilitators, it’s hard to know where to start when writing about the Friction Series event. To solve this dilemma, I began to search the crowd for as many different perspectives on the night as I could find.

I asked everyone the same question: What stands out to you about tonight’s Friction Series? Here are just a few of the responses:

Dan, Gym Manager at PG Belmont: I’m happy to see such a great turnout and to host members from San Francisco and Sunnyvale. Tonight I see lots of new connections being made within the PG community!

Bret Johnston, Director of Setting at PG: I’m happy to see that climbers are having fun, feeling challenged by the routes, and getting creative with their sequences. Our setting team works to provide high quality routes, and tonight we succeeded.

Ryan Honda, head climbing coach at PGSF: I’m happy to see so many team kids crushing these routes. The kids are all training hard and psyched to show members how strong the team is for ropes season.

Tessa and Ramsay, Belmont regulars and Friction Series first timers: The whole event feels like a party! The routes are fun and challenging, and it’s great that everyone is belaying each other so it doesn’t matter if you come with a partner or on your own. It’s been great meeting climbers from other gyms too.

Casey Spain, representative from Icebreaker: I love that the PG community is cool and relaxed, and that PG is easy to work with. I’m so glad we came to this event!

As you can see, there were a lot of different sides to this story. Luckily, everyone seemed to agree that night was a success. Personally, I was happy to see the strong turnout of young climbers at the event. Watching so many team kids climbing well, and also seeing the many kids who came with their parents or friends, was really inspiring. 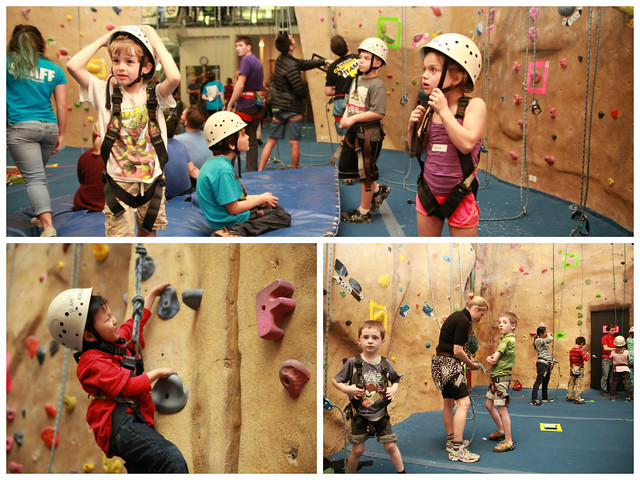 The youngest generation of crushers gearing up at Friction Series. 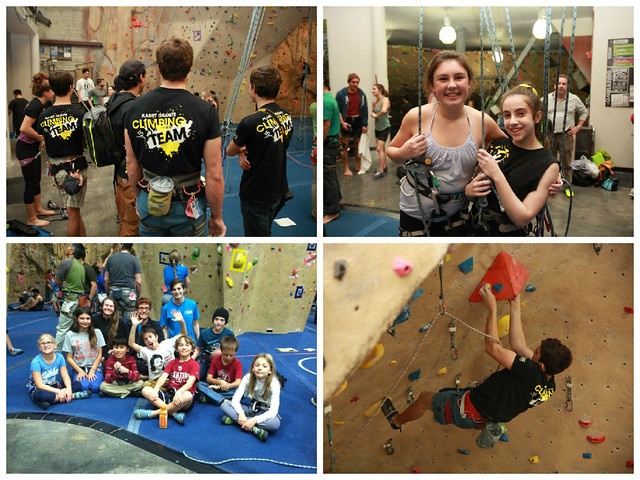 Some members from the PG Belmont, Sunnyvale and San Francisco climbing teams showed up to crush! We had a particularly strong showing from the Belmont Rock Monkeys (beginner level team), as seen in the bottom left photo.

Last but not least, a big thank you goes out to our sponsors and to all the people who worked hard to make this event happen. Thank you La Sportiva, Black Diamond, Petzl and Evolv for being primary sponsors of the event. Another thanks to Redwood Trading Post, Organic, Patagonia, Jansport, Vesta, Gator Games, the Dragon Theater, and all our other wonderful event sponsors. A third thanks to Icebreaker, Three Twins, Strike Brewing, and Muscle Milk for tabling at the event. People (and I) loved having you there! Of course, a BIG thank you to Bret Johnston and the setting crew, the PG Belmont staff, and everyone else who worked behind the scenes to make this event happen. And a final thank you to all of you members who participated and made the night great! It was fun to meet some of you in person, and it was great having you all in the gym! I was so happy to see such a positive community atmosphere throughout the night, and I hope you all had a great time. See you next month in San Francisco for their Friction Series on March 20th! 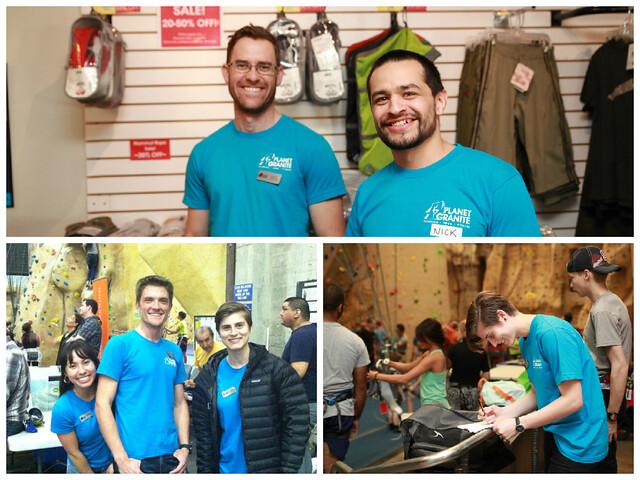 PG staff working hard and always smiling! Top: Eliot and Nick, gym managers of PGSF and PGSV, came all the way to Belmont to help out with the event. Bottom Left: Dan, gym manager at PGBL, Chelsea and Casey looking good for the camera. Bottom right: Chelsea, MC for the night, going over her notes before getting things rolling 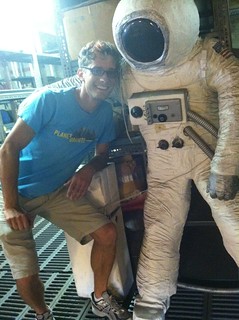 ABOUT THE AUTHOR: Jesse Schouboe has a passion for education, climbing, and being outdoors with friends. Now back in the Bay Area after several years of traveling, he can often be found talking with friends and drinking tea in the gym between climbs. He loves the PG community, and is psyched to take both his training plans and the PG Belmont youth programs and community events to the next level.