For a fourth straight year, Planet Granite committed to match up to $20,000 for donations to the American Safe Climbing Association (ASCA).Well, we’re thrilled to announce that for a 4th time, thanks to the generous support of our members and the wider climbing community, we have surpassed our goal! In fact, total donations to the ASCA totaled more than $38,000 over two months!! Including the PG Gives Back match, that means the ASCA has almost $60,000 to put towards replacing bolts worldwide  and making outdoor climbing safer for everyone! We are so thankful for everyone that attended our two main fundraisers and donated to the online auction. Below find out how professional climber (and local) Alex Honnold got involved, plus how Planet Granite Portland kicked it all off!

But he couldn’t really complain, at least it was raining. Drought-plagued California needed the torrential downpour. Even if it meant the notoriously impaired San Francisco, “I-don’t-know-how-to-drive-under-anything-but-sun-and-fog,” drivers were making traffic a nightmare.

Alex jumped. “Dude! Aren’t you late for your Planet Granite presentation!” yelled the guy in the car next to him. “Oh, and nice op-ed in the New York Times,” the man finished as he passed Alex’s car. “I’m writing my notes for the presentation now!” Alex protested. After showing up wet as a dog (and late), the ever-modest climber kicked off our 4th Annual ASCA Auction by sharing that story with the crowd gathered to hear him speak about his latest adventures in Yosemite. A shout from behind the San Francisco top-out boulder suddenly split the air, “Hey, that was me!” 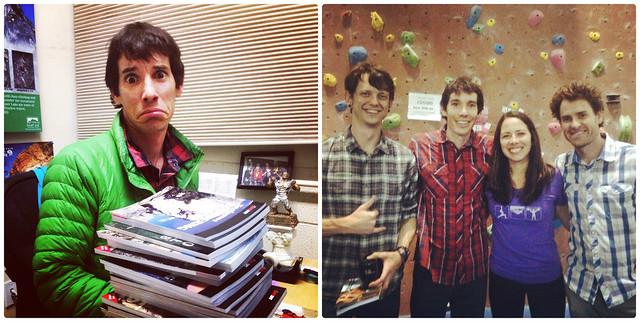 Left: A wet Alex Honnold signs Supertopo books for the auction. Right: Planet Granite Auctioneers are psyched to have Alex join them!

Such is the life of the globally renown, yet beloved local (and slightly stinky – hey he just got off El Cap!) …err, free soloist. Planet Granite was honored to have Alex and Supertopo founder Chris McNamara help auction off some of the more than 150 items donated to PG for the ASCA fundraiser. The two expertly rattled off numbers, bidding up everything from McNamara’s Tahoe home rental to El Cap speed fiend (and Alex’s record-holding partner) Hans Florine’s Yosemite home. “I’ve stayed there, I promise it’s cool,” affirmed Alex. When it came to auctioning off a day of climbing with another pro-climber, local Ethan Pringle, Alex acknowledged Ethan always beat him at youth comps when they were kids. “He’s, like, really strong.”

Other auction highlights included the Bay Area designed, folding Oru Kayak, which Alex graciously modeled and gear from Goal Zero, Patagonia, Prana, and dozens of other local and national sponsors (THANK YOU SO MUCH!!). Planet Granite Manager (and Chief Auctioneer) Eliot Carlsen got especially flustered when when his employee and co-auctioneer attempted to win the Half Dome in a Day with Jim Herson. Unfortunately, the $100 in her bank account was no match for the $800 Mr. Herson ultimately commanded. All in all, thanks to the AMAZING community that showed up, the live auction raised more than $10,500 in ONE NIGHT!

After the auction shenanigans, Alex gave a compelling presentation on his recent adventures ranging from climbing expeditions to the work he is doing with his non-profit, The Honnold Foundation, for instance bringing solar energy to remote areas of the Navajo Nation. The ever-professional Alex, then stayed for an extra hour and a half simply answering questions, signing books, and taking hundreds of selfies with community members. 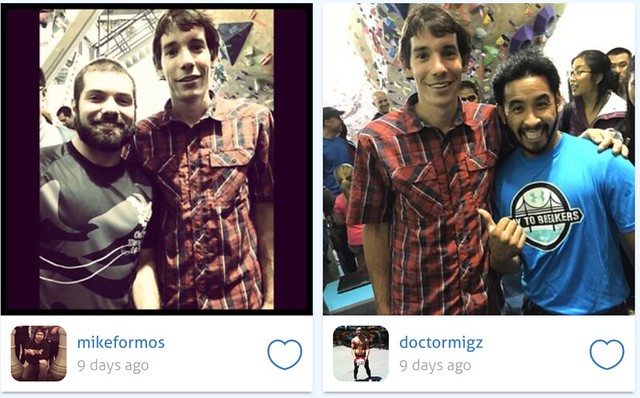 The auction in San Francisco may have brought in the big bucks, but it was our Portland community that kicked it all off!

Planet Granite Portland opened the first week of November and scores of people from the greater pacific northwest came to check our our latest gym for free and learn more about the ASCA impact in Oregon. Volunteer re-bolters from Oregon manned the booth and answered questions, while Stumptown Coffee provided the drinks. Dozens of raffle tickets were sold raising more than $1300 over two days. Importantly, new and experienced climbers alike learned more about the valuable work being done by the ASCA and their army of volunteers in making sure beloved local areas like Smith Rock and Broughton’s Bluff  stay safe.

To our HUGE Planet Granite community. We are so thankful for all of your time, donations, and excitement over the last two months in raising money for this organization that we believe is so vital to our sport.
CONGRATS YOU ALL – $60,000 IS NO CHUMP CHANGE! 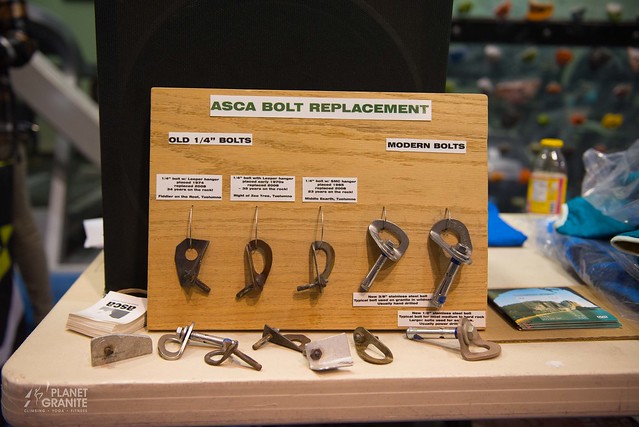 *Let’s get a round of applause for all the support we received from these amazing companies! Thank you all so much for your generous donations!*