My Ascent into a Life of Climbing – by Jack

(Apparently when Sports Illustrated asked the infamous author Hunter S. Thomson to cover motorcycle races in Las Vegas for a 500-word article, he returned with a 25 page meandering manuscript that would eventually become his iconic novel, Fear and Loathing in Las Vegas. I shall try my best not to do that here.)

I was completely new to climbing when I first started working at PG this summer, and I was entirely unsure what to expect so it was an understandably odd sensation when I found myself jammed in a car with four other climbers, shooting up to Tahoe for a weekend of climbing, not two weeks after I had been hired.

It was about 1 a.m. when I started wondering if I was sure about what I had gotten myself into. I was sitting in the front seat of my coworker Jesse’s car, watching his headlights reach out onto the ever-so-dark mountain roads a bit north of Auburn, California. I had met Jesse a week prior, and though I had to come to know him a lot better in the following two days (and coming weeks), at the moment all I knew about him was that he loved rock climbing, owned a five-seater car, and had a certain proclivity for dying his hair vibrant colors (currently pink).

Piled in the back, amidst crash pads, a few packs, sleeping bags, and countless carabineers sat Cristina, Julia, and Ali. All together, we made five of the new Event Staff team members.

Almost all of us had met for the first time on the first day of Event Staff training—the instructional period in which all of us new Event Staff learned the skills we need to make Planet Granite summer camp awesome for all the kids to attend. After learning the ropes (pun intended), Jesse had invited anyone who was interested to go up to Southern Lake Tahoe to climb. I jumped at the opportunity, as did the other three newcomers.

While Julia—and obviously Jesse—had climbed before, Ali, Cristina and I were new to the ways of the rock. You would have thought that our lack of experience—coupled with the fact that none of us really new each other—might have made the car ride a bit uncomfortable.

But I have to give credit to PG hiring process; the five of us hit it off right away. We had left late—Cristina was the last pick-up, at around 10:30 p.m.—and the next four hours were filled stories, laughing, and some nefariously strong black coffee that Jesse brought along to keep our energy up.

We got into South Lake Tahoe after 2 a.m., and pitched a few tents in the dark, with Jesse and I setting up to sleep under the stars. I remember lying out under the impossibly wide Tahoe sky. Counting stars is a good way to fall asleep up in the mountains, and after a week of work and a long drive, I was passed out pretty quickly.

We were up a few hours later, but there wasn’t any time for grogginess. There were rocks to climb. 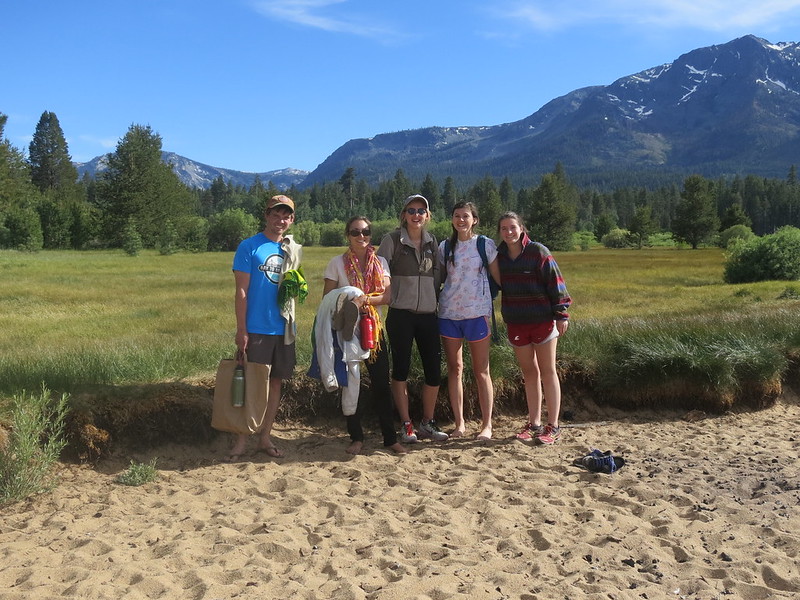 In the morning light, we were introduced to two of Jesse’s friends, who had been (understandably) fast sleep when we arrived. Nick and Jennifer solidified my belief that “climber” and “friendly” are synonymous terms; meeting them was one of the highlights of the weekend.

But the major highlight was arriving at our real destination: 90-Foot Wall.

90-Foot Wall is actually a misnomer—the wall is more like 70 feet tall. It’s a roughly 200 foot long crag, with great face and crack climbing along the length of it.

While 90-Foot offers lead climbing, we opted to climb to the top to set in a few anchors for top-rope climbing. Being new to climbing meant I didn’t know much about anchors but, seeing I’d be depending on said anchors to protect my life and limb(s), I decided that I wanted to at least watch them get set.

I want to say that watching Jesse, Nick, and Jennifer set anchors was like watching artists at work, but setting cradles for climbing rope seems more like an exercise in engineering than art. I was fascinated by how important it was to establish symmetry. For every anchor we used two bolts (metal rods set into the rock for climbing purposes); from the bolts, we set out two lines of equal length, and connected them with carabiners. At each step of the process, we established redundancies—two lines of cord from every bolt, and two carabiners at every junction. At the end, the anchor made a “Y” shape—two lines of cord coming from each bolt, joined at the middle by two carabiners. The rope we would use while climbing was to pass through these two carabineers.

While setting the anchors, a few local climbers gave us some tips to help us make them extra secure. They were very helpful, and even more friendly. I’m telling you—climbers are a different (perhaps superior) breed of people.

We arrived at our last step in the process. Jesse shouted, “Rope!” and threw down what was to become our lifeline. We then hiked and scrambled our way back down to the foot of the rock, donned our harnesses, attached a Gri-Gri, and prepared to climb.

It’s hard to describe the feeling I felt when I walked up to the base of the wall to tie myself in. It was a mixture of nervousness, only-two-hours-of-sleep-ness, and curiosity. Obviously I was incredibly excited but, to be honest, I was pretty spooked too. I had climbed walls in the gym plenty of times, but something about being out in the mountains, climbing on actual granite, had shaken me up a bit. There were so many new variables to think about, and my mind was racing trying to think of all of them.

All the nervousness, all the overthinking, all the lack of sleep—it disappeared the second I put my hand on the first hold I could see. Everything floated away as my focus latched itself onto the wall and the task at hand. I got my feet up. I arranged my hips with the wall. I began to climb.

Something I noticed right off the bat was that there were no pink handholds—or green, or orange, or red for that matter. It wasn’t like the gym; the entire wall all looked the same. But I quickly began to recognize what the handholds were on an actual wall. I used everything I could to climb, the most useful of which was a relatively large crack down the face.

There came a moment about halfway up the face. I leaned back to take a break and felt the rock, rough beneath my skin. I felt the sun on my back and smelled pine trees. As I rested I saw blue in my peripheral vision. I looked to the right just as the wind picked up. As it blew through my hair I saw Lake Tahoe’s beautiful Emerald Bay.

I’m not sure if all climbers have “their moment,” but for me, that was it. That was my moment. Ever since then, I’ve been hooked. I now know climbing is a way to get close to nature, and close to myself. It is a beautiful sport.

I am so grateful to all the people that made the trip such a success—Jesse, Julia, Cristina, and Ali have been great to work with in the weeks since our trip, and I have even seen Nick around the gym a few times. Planet Granite is a community—a village—and I am so glad to have been welcomed into the heart of it. I hope it will serve as a basecamp as I begin the ascent into a life of climbing.