It’s a week past the conclusion of BLOC PARTY 2014 and the excitement is STILL booming up in San Francisco.

Competitions seem to bring out the BEST in Planet Granite’s community and I’m always inspired to see so many people cheer on and encourage others in a friendly competition!

We’ll start at the beginning: REGISTRATION. 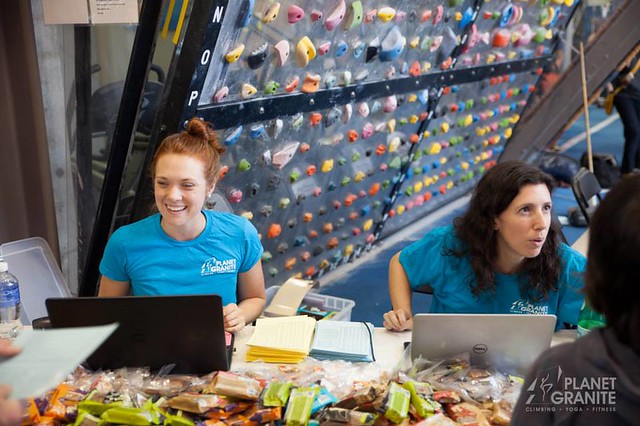 PG Managers Kalie and Carolyn checking climbers in before the climbers check the problems out.

And then we’ll skip over the logistics (I just wanted to put in a photo of the shining, smiling faces of PG staff!) and let’s get to the meat of the matter:

Everyone was super psyched on the climbs.

The walls this year were chock full of fresh grips from Rock Candy, Kilter Grips and Urban Plastix.

As the chalk will show all of the problems got A LOT OF LOVE but perhaps the boulder that really stole the reappoint show was number 32, a green compression pinch rig set by PG’s one and only Walker Emerson, ‘SMASH‘.

The problem has it all– it looked cool, it climbed well, people looked psyched to top it out and falling on it was even okay because it meant you could climb on it again.

When Walker was asked what inspired the route he declined to state but when crusher Kearney Coghlan, the Women’s 3rd place Winner, was asked about the boulder she said she wished it would have gone on for 3,000 feet like El Cap. We think Walker would approve!

The event was visited by a smattering of local vendors including Sports Basement and Three Twins ice cream.

And there was also a smattering of prizes to be won by climbers and spectators alike through the raffle. And even more pizza to be won just outside!

After an evening of fantastic climbing the heat was turned up while the weather cooled down for our Onsight Finals.

*For those of you who don’t know what an Onsight final is, don’t worry! It is quite simple:

Five top-scoring finalists of each sex go into isolation. While in isolation three finals problems for both Men’s and Women’s are put up by PG’s quick trigger pit crew, I mean setters.

The finalist are then taken downstairs and each person has 4 minutes to look at the boulder and determine the intended sequence of these new climbs on the spot.

Onsighting tests a climber’s personal proficiency at reading a boulder and efficiently carrying out the moves.

The showy problems made for great entertainment and stupendous climbing!

Everyone did a fantastic job in finals and the crowd was psyched!

Congratulations to Hannah Donnelly and Andy Lamb for their crushing wins and crushing grips!

Now get outside and rock climb!

*As always we want to say a BIG thanks to all our sponsors!* 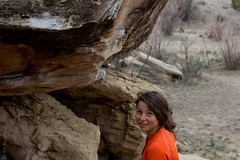 Born under a smoldering Mars, it is rumored that Shannon began setting routes as a young girl in the gaudy playpens at the Sultan’s palace in Delhi on walls of pure velvet and pinches of wrought gold. As word of her startling talent spread she was adopted by a traveling English sugar baron and quickly inducted into the glittering halls and silk petticoats of London’s new rich, where she lived for a time before stowing away on the four-master Santa Guadalupe, bound for the Americas. What transpired aboard the vessel can only be guessed at by a tremor in her root-like thumbs—though many have of course cited the numerous horrific diaries discovered among the wreckages of two Japanese whalers. How she at last came to Planet Granite remains unknown…

*What is known* about Shannon is that she is an ambassador of La Sportiva, Organic Bouldering Mats, Joshua Tree Skin Care, Flux Coffee, and Solo Eyewear. She chooses to wake up in the morning with a Flux and a snuggle with her dog/black bear, Philia. She is a wealth of information about climbing products, training for climbing, climbing holds and outdoor climbing and eagerly invites you to seek out or rival her Valerian steel sharpened advice. She’ll likely have a smile and snacks for you too!
*Follow Shannon’s adventures on her personal BLOG and Facebook athlete PAGE.*
|  Bloc Party 2014 Bouldering competition Onsight Series Final PG San Francisco