PG celebrates 100 years of National Parks, does stewardship work for the next century 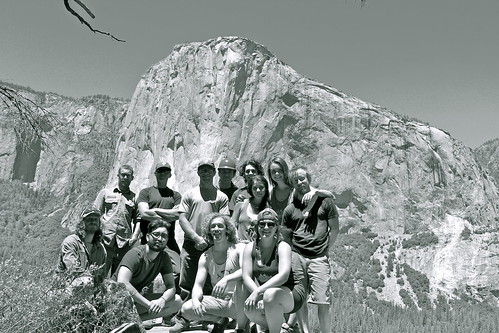 Happy 100th birthday to the National Parks!   Planet Granite donates to the Yosemite Conservancy, the Access Fund, and other groups to help preserve natural places we climb, and keep climbers’ reputation positive in the parks we share.  Read on for more on that topic, and how you can get involved.

Each year members of the PG staff take part in stewardship work. Some take trips to local crags like Castle Rock and Pinnacles with the Bay Area Climbers Coalition.

Others make their way to the birthplace of modern climbing, Yosemite, to clean up trash and restore the trails and crag landscaping that prevents erosion and keeps climbers in the good graces of Yosemite rangers. This is their story, in the words of PG San Francisco’s manager Eliot Carlsen and lead superviser Joey Paris. 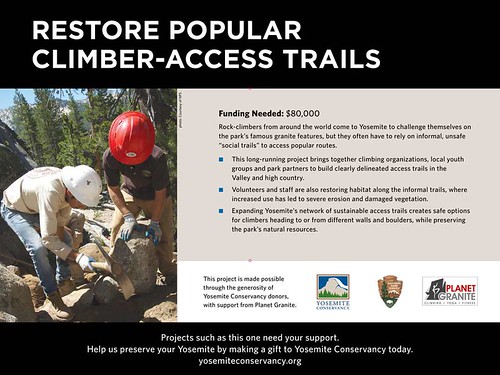 If you’re walking to a crag in Yosemite you may see the sign above in places like Half Dome, describing Planet Granite’s financial support for the park.

Planet Granite has donated every year to the Conservancy with funds earmarked to help with rebuilding trails. In 2016 alone, we’ve donated $10,000.

But our connection to the park and our work to keep it pristine is also hands-on.

PGSF Manager Eliot Carlsen has been heading up staff trips to Yosemite to do trail work for years.

“We’ve done most of our stewardship projects in Yosemite Valley, and we sponsor the Yosemite Conservancy which does work in Tuolomne as well,” Carlsen said. “It’s kind of our home climbing area for Bay Area people, you could call it. A lot of the climbing community go to Yosemite on the weekends to take advantage of the park there. It’s really important that we’re not just using the park, but also taking care of it.” 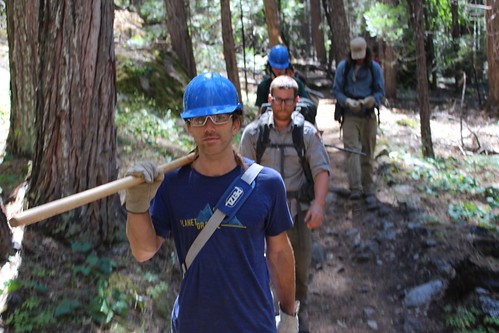 Joey Paris pitching in on trail work at Yosemite

“I try to organize two trail building trips per year, one in spring and one in fall. About 15 PG staffers and community go,” he said. “It’s super fun. Usually we do it over a three day weekend. We go climb or hike or bike or swim and then stay in the Yellow Pines Campground. Then you’re doing this trail building by the cliffs. We’ve done two years at the El Capitan base, building the trail up the eastern side. Any routes that go up towards the Dawn Wall, that’s the trail they’re going to use.” 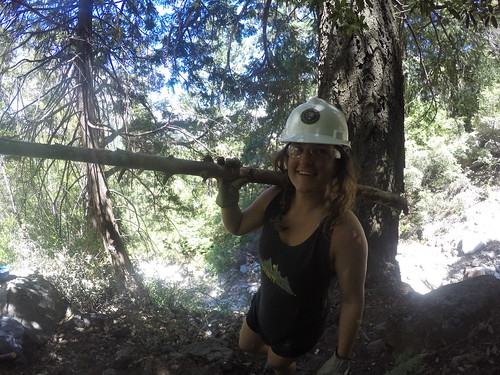 Trail building isn’t done for cosmetic reasons, to make the park look nice. There are serious reasons to build trails: to protect the surrounding wilderness from foot traffic, and to stop erosion from causing the approach land to the crag to vanish.

“The hillside has been eroding for the last few years,” explains PGSF Lead Supervisor Joey Paris. “We put checks in–checks are basically logs you put in to make a staircase to help the water travel down without taking too much land away. We blocked off other parts where people were making social trails, so they use the main climbers trail to the cliff.”

The work at Yosemite isn’t a chore, PG volunteers say.

“It’s been a real privilege to give back to the park. I’m always there climbing and enjoying the park, so it’s good to give back and hang out with the cimbing rangers and put a good face on the climbing community,” Paris said. “We love the wilderness and we want to do our part to take care of it.” 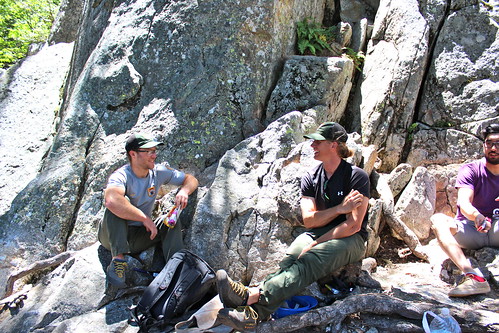 Want to lend a hand?  PG members and climbers in the community can give back at crags near and far.

Paris points to several organizations who need volunteers for stewardship work in the Bay Area and beyond: