John Muir once mused, “If I were so time-poor as to have only one day to spend in Yosemite I should start at daybreak…for the top of Liberty Cap.”

You see, climbers around the world are wont to quote Muir when evoking their impassioned devotion to rocks, but for those of us lucky enough to live here, Muir’s words aren’t just literature. They are our weekends.

The Planet Granite community is a diverse group of weekend warriors that for the past two decades have explored every possible reach of Yosemite National Park. From rapping into the steep sport climbs on Killer Pillar, to establishing new lines in Tuolumne, to epics on El Capitan, our members and employees have done it all!

And our PG Gives Back Program is the key part of what makes our community so unique and special – we are not only passionate about and humbled by the areas we climb in, we also seek to support the organizations that help conserve that special land.

That’s why over the last 3 years Planet Granite has donated over $15,000 to the Yosemite Conservancy’s Restoring Climbing Trails Program led by climbing Rangers Jesse McGahey, Ben Doyle, Eric Bissell and others.

In addition to funding, volunteers from our staff @PG have worked to restore popular trails to crags such as Sunnyside Bench, Cookie Cliff, Pat & Jack’s Pinnacle, Royal Arches, Olmstead Canyon and many more!

*Below you’ll find a trip report from PG San Francisco Instructor Cody Blank about a recent weekend in the valley doing trail work under El Capitan.

Recently Ben Doyle, one of the Yosemite Rangers, extended an offer to Planet Granite to come to Yosemite Valley and do some trail work at the base of El Cap.

In exchange we got free camping over the weekend, which also would not count towards your yearly 2 week limit.(YES!) Being able to leave a positive and long lasting mark on one of my favorite places in the whole world, AND I get to climb for free in the Valley. COUNT ME IN!

Those of us from PG included San Francisco Gym Manager and trad crusher Eliot, Primo, a trad curious boulder-er, Samea who is relatively new to climbing outside and Me, an average trad climber who likes to run it out on below average stuff.

Our rushed Thursday night departure,and trying to shove all of our gear into Eliot’s Subaru Impreza, made for a cozy trip.

LEFT: The Three Brothers was the view out of our tents. RIGHT: Sam on his first outdoor climb, killing it.

Friday morning we were greeted with Yosemite’s usually breathtaking majesty.

We then headed off to Pat and Jack Pinnacle to meet up with PG Sunnyvale staffer Marika and her friend Sam. We found out that this was to be Sam’s first time outside. Not many places better to first climb outside!

One of the cool things about being in The Valley, depending on your point of view, is how if you really want you can find some ‘city comforts‘ easily.

So all of us being huge Giants fans we HAD to watch the World Series while we were in The Valley! So for Friday night we headed over to Curry Village to partake in pizza and rooting for the Giants. If you go to the pizza deck get the spicy hawaiian, putting jalapenos on hawaiian pizza takes it to the next level!

On Saturday morning we met up with more PG staffers, Chelsea and Sara, and had Climbing Ranger Ben Doyle give us the briefing on what we would be doing that day.

We were also greeted by the pleasant surprise that THE ALEX HONNOLD would be joining us for trail work. (!)

LEFT: Getting gloves, eye protection and helmets. ALEX HONNOLD forgos the protection!  RIGHT: Primo and the trail builder Max rolling a step into place as Chelsea provided additional weight to a rock so other steps didn’t shift.

The work we would be doing was essentially making stone stairs up the base of El Cap on the east side. This would reduce erosion caused by the small trails that wound through the trees.

Luckily professional trail builders were there to guide us and provide essential know-how to make long lasting stone trails.

LEFT: Alex and I excavating down to get a solid bed for our section of steps. RIGHT: A member of the trail crew explaining the next step in his section.

LEFT: Ranger Doyle supervising, making sure he didn’t have to fill out any paperwork for injuries. RIGHT: Eliot manning one of the grip-hoists.

LEFT: Samea rolling some trail material . RIGHT: The trail building crew really could work magic with the rock bars and the grip-hoist!

Doing this work really made us appreciate and realize how HUGE the projects were that were undertaken in the National Parks during the Great Depression.

Next time you’re in the valley, take a look around and process the fact that most of the stone trail work was done without any mechanized assistance!

After a solid day’s work we again had to support the Giants but this time over at The Mountain Room Lounge. A much more solid showing of the Giants that night with the 11-4 finishing score!

On Sunday we went to a relatively newer crag, Mecca, which sits at climbers left of Lower Cathedral Rock. Meeting up with a PG San Francisco regular Danny, we tackled some cool slab style climbs.

I managed to accidentally sandbag Eliot by misreading the topo and directing him to go up King and I (5.11c) since it was easy at the start. He was able to traverse back over to Mecca Lite (5.10c) the route we originally intended to climb.

A nice advantage to climbing Mecca Lite is that at the anchors you can tension traverse over to the Mechanical Advantage (5.12a) anchors and top rope it. Don’t be scared off by the grade though as most of the climb is 5.10 slab with good rests. The crux is a v4 problem at the last bolt which protects you well. No scary whippers here if you decide to lead it. 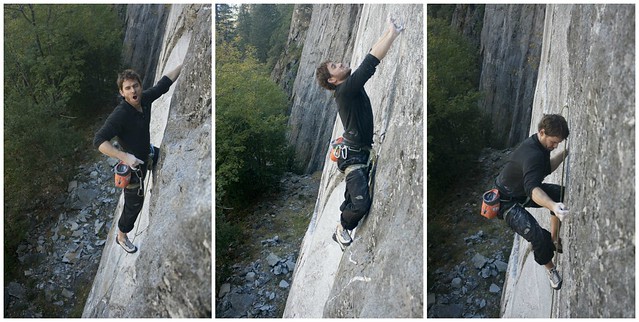 LEFT TO RIGHT: Eliot about half way up his lead of Mechanical Advantage.  An unnecessary but funny double “thumb-dercling.” Or as I like to call it ‘thundercling’. Then Eliot getting stoked below the last bolt.

Then we walked over to a little better known section of Lower Cathedral and climbed 76 Degrees in the Shade (5.10c).

Eliot got back at me by leading up Mac Daddy (5.11a) and saying that it was just “high 5.10”. I was without a guidebook to educate me otherwise and found out it was sustained 5.11a crimps and thin liebacking.

We then made our way back to the Bay listening to the Giants put themselves yet one more game closer to winning the World Series.

What a great way to cap off an already fantastic weekend!

*GET INVOLVED with the Yosemite Conservancy’s Climbing Trail program! Reach out to Heather Boothe at yose_volunteers@nps.gov to set up your own volunteer group!

More Pics from the trip: 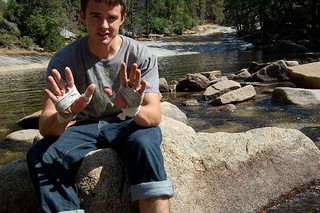 ABOUT CODY: Cody is Bay Area native and loves all of California. The way trad climbing allows him a unique perspective of the most beautiful places in the state draws him to getting scared on gear. Even though he loves climbing in all it’s forms he can never decide on one perspective of California so he also kiteboards, surfs, mountain bikes, and skis.

To learn more from Cody, enroll in the Crack Clinics or the Beginner Rock Climbing Course at PG San Francisco.