Replacing Bad Bolts Near Portland – An Interview with Micah Klesick

Micah Klesick is a local climber who also happens to be a re-bolter with the ASCA and has helped to replace some bad bolts at the crags you love. Who knows, maybe that last whip you took out at French’s was caught by a shiny new ASCA bolt rather than one pictured above? We sat down with Micah to get some beta on how bolts are replaced, what you can do to help, and the work we’ve still got left.

Hey Micah! How long have you been working with the ASCA?

I first started replacing bolts about a year and half ago (spring of 2014). I had used the ASCA information to find out what bolts to use in this area (Stainless Steel) when I had first started developing new routes, and when I started noticing bad bolts, I contacted Greg Barnes, at the ASCA, and began to work with him on getting a supply of bolts for replacing old bolts with. I’d like to point out that there has been individual climbers that have been replacing bolts in the area for years. Our effort is simply the first organized and spearheaded drive to replace as many bolts as possible.

Which crags near Portland have you helped to replace bolts?

Where near Portland have you found the most bad bolts?

Probably Broughton Bluff, but we’ve found bad bolts at every crag so far! Even newer crags like Ozone had their fair share of dangerous bolts! French’s Dome had some of the more unique bolts I’ve seen (ie. eyebolts from the hardware store). We’ve found lots of homemade hangers, which is kinda cool, but also very scary. But, back then, that’s all they had!

What are some quick tips climbers can take away on how to inspect a bolt?

There is definitely some things a climber can look for on the spot. But other things are hidden below the surface, and are hard to tell. Things you can look for are: 1. Excessive rusting. If you see a bolt that is really rusted, with pitting, and sometimes rust streak stains on the rock below, that bolt needs to be replaced. If it looks like surface rust, its most likely OK, but we would plan on replacing it anyway. 2. Certain hanger types: ClimbX hangers, or SMC hangers. Both have their names printed on the hanger, and both have had failures in the past. We are trying to replace all those hangers when found. 3. Hanger deviation: A hanger should be oriented vertically, or within 10 degrees of vertical. If it is canted to the left or right more than that, it can cause the quickdraw biner to catch on the nose, and potentially break the biner, if the quickdraw is not placed correctly. If any of the above scenarios are found on a route, I ask climbers to either post a comment on MountainProject.com (as a MP admin, I will see the comment, and can acknowledge it), or post it on our Facebook page, Portland Vicinity Rebolting Effort. 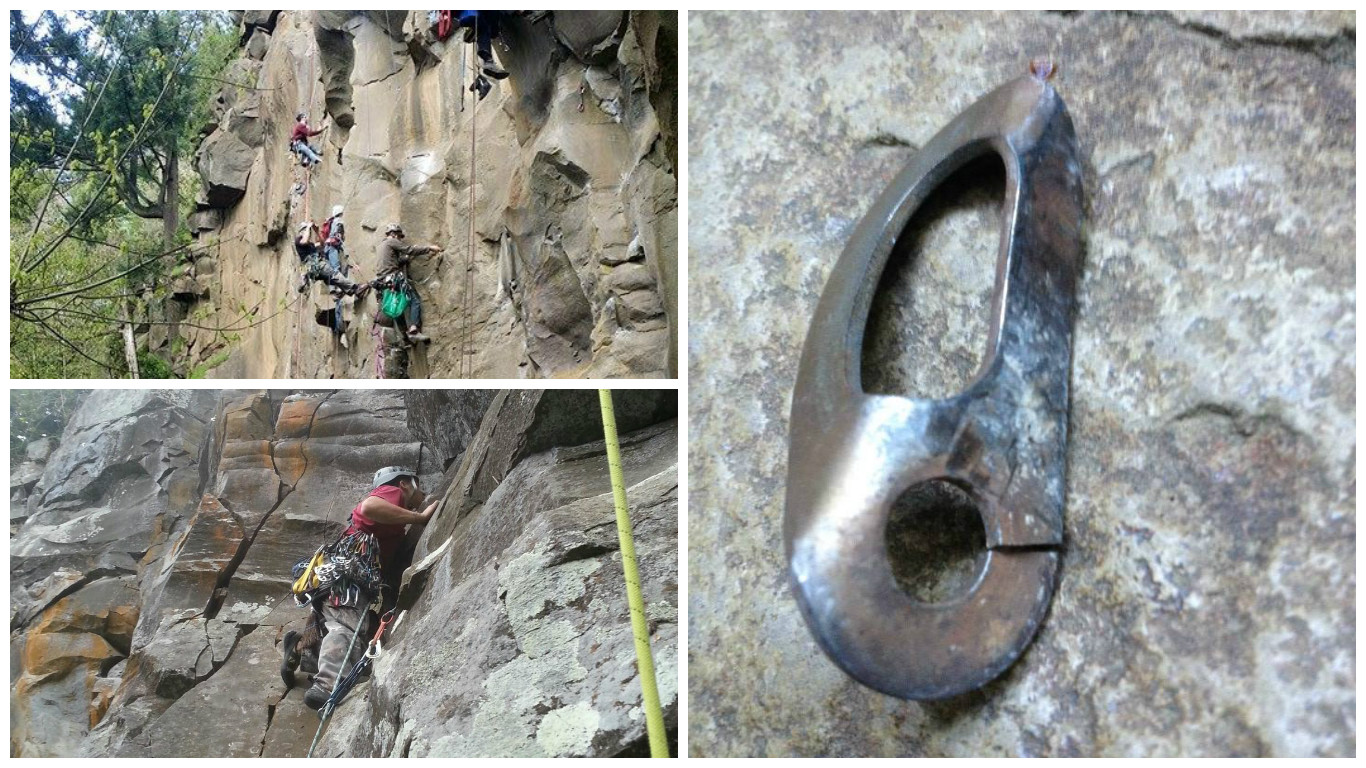 How common are bad bolts?

Well, not as common as they used to be!! 🙂 We have replaced hundreds of bolts over the last year and half, and it’s made a huge dent in the really bad bolts. I’d guess that about 75% of the worst bolts are now replaced at most of the crags in the area (Carver being the exception).

But sadly, the work will never really end, because until just a few years ago, some developers insisted on using non-stainless bolts, and those bolts will all need to be replaced in the next 10-15 years.

The bolts we are replacing are almost all due to rust. Until a few years ago, most developers used plated steel bolts, not stainless steel. Now that the research is out, we are trying our best to push that ONLY SS bolts be used. A non-stainless bolt will only last 15-25 years around here (sometimes much less). But a SS bolt will last at  least 50 years, and more likely in the hundreds of years, depending on the type of bolt. We’ve started using glue-in bolts on routes that stay wet longer, and those bolts are estimated to last upwards of 100-300 years before needing replacement.
Some bolts do need to replaced because of ignorance of the developer, or a mistake made. As time goes on, we hope to develop training videos and clinics for new developers in our local area, and teach the next generation how to safely and properly bolt new routes.

What is the process of swapping out a bad bolt?

It depends on the type of bolts and quality of the rock. Obviously the best case is to remove the old bolt, and place a new bolt in the same location. However, that is a time consuming, and difficult process with most of the bolts around here. So typically, we remove the old bolt by breaking it, and then putting a rock putty in the hole to disguise it, and then we place a new bolt close by so that the clipping stance does not change. However, sometimes we do have to move the bolt due to rock quality, and that is done on a case by case scenario by our experienced developers. 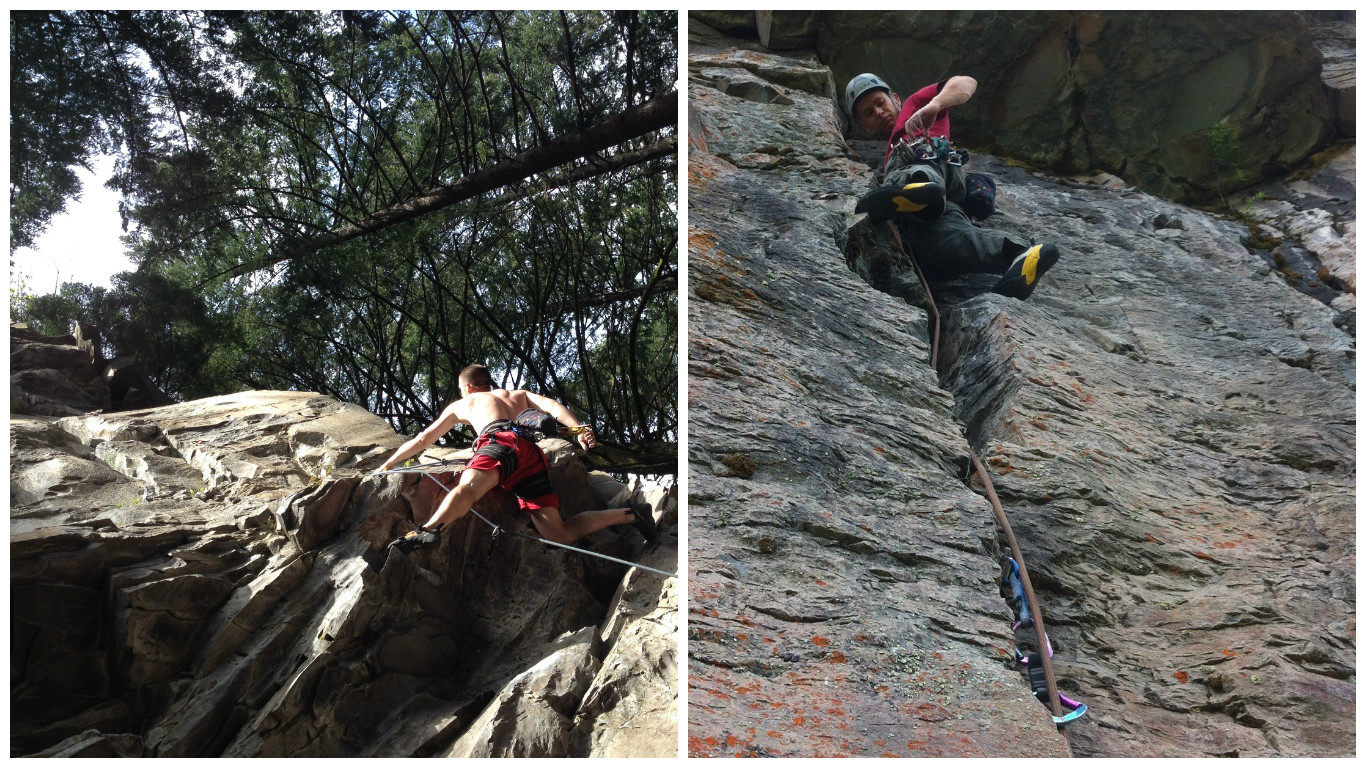 How does a donation to the ASCA help to replace bad bolts? What supplies are needed in addition to volunteer work?

The money donated goes directly to the ASCA, who in turn buys bolts, hangers, glue, hole brushes, drill bits, etc. I then have a spreadsheet of routes that need to be rebolted, and once or twice a year, I email a list of items needed to the ASCA, who then sends those bolts to me, and I work with my crew to distribute the bolts, and we keep track of what has been done, and keep the ASCA and the community updated on what has been replaced. Much of the money donated comes directly back to the Portland area in the form of supplies. I’ve been very impressed with the amount of support our community (both individual and business) has given us, both in donations, supplies and volunteer time!
As far as supplies needed, we can always use more tools, such as rock hammers, ascenders, old retired ropes, retired biners/draws. We have been working on creating a tool stash, this way the guys doing the rebolting don’t need to wear out their personal gear while doing the rebolting. Some retired developers have even been generous enough to donate their unused bolts and bolting equipment. And we can accept all donations through the Mazamas, which gives us the ability to give tax refund slips to donors.

What crag, near Portland, is in need of the most help? What makes this crag unique?

Currently, Carver is next on the list. It has seen very little rebolting work since it was bolted in the early 90s, and is badly in need of it. It’s a bit unique though, in that its on private property, and a pass is required to be there. So anyone rebolting there will need to purchase the pass before going there. So it’s been lower on our priority list due to that reason, but I think we will begin to work on it this fall or next spring.

How can you help?

For the month of October, PG is matching all donations to the ASCA, up to $20,000!! Check out a more detailed blog post on that here. Remember, if you see bolts that look like they need to be replaced (or you’d like to help out!) please post that information on www.mountainproject.com or the Portland Vicinity Re-Bolting Effort Facebook page.