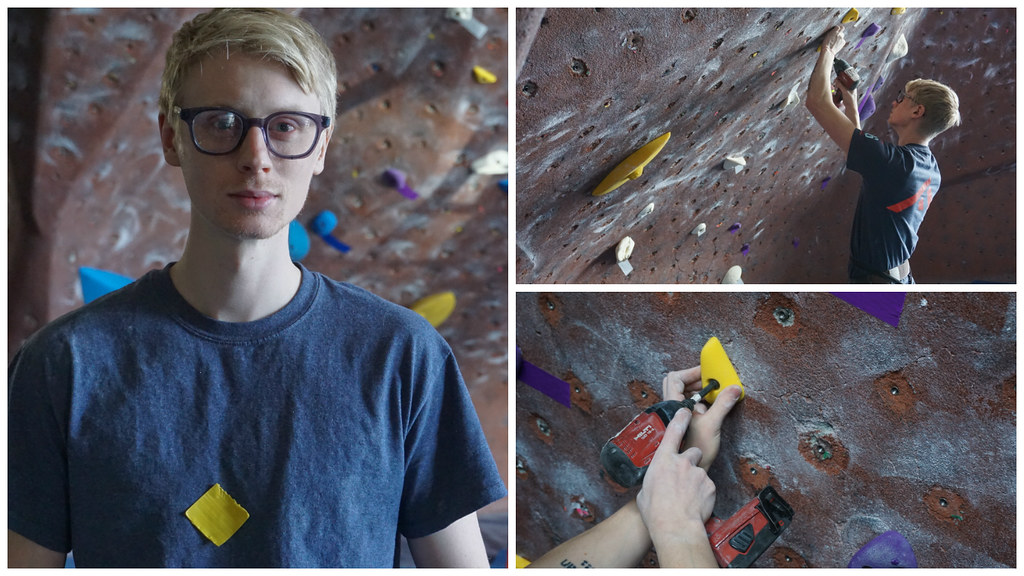 Bret Johnston was literally raised in a climbing gym. Two years before he was born, his father started Vertical World in Seattle, the first climbing gym in North America. So for as long as he can remember, Bret has been climbing.

He first started setting at 14, and now at the age of 27, it’s a passion of his that hasn’t stopped.  Bret has more than a decade of setting experience, and a Level 5 USA Climbing (USAC) Setting Certification at work behind his drill. As the Director of Setting at Planet Granite, Bret brings this top-level experience to shape the exciting and challenging boulder problems and routes that Planet Granite has to offer.

He just returned from last month’s USAC Adult Sport and Speed Nationals, where he served on the setting crew. That makes it more than 10 national level competitions which Bret has worked as a setter, including several events he took charge of as the Chief Routesetter.

For national competitions with elite competitors such as Kai Lightner and Margo Hayes, Bret uses different strategy and process than his normal routine. We recently sat down with Bret to discuss what it’s like to set at the most elite climbing competitions in the country for some of the best competitive climbers in the world.

PG: So Bret, how do you go from setting at a gym to setting for USAC National competitions?

Bret: There is a pretty long certification process through USAC to be a route setter for high level competitions. There’s five different levels: you start off at a Level 1 clinic covering basic competition strategy then you have to work your way through one more clinic to get level 2. To gain level 3 and 4 you have to gain practical experience by working at National level events. If you have done many, many nationals and you have proven yourself to be a leader within the organization, you can test to be a Level 5 setter and serve as Chief for National events.

PG: What’s the process like for setting a finals competition route, for instance in this most recent Adult Sport Nationals you set for?

Bret: The finals round was on a Saturday, the Monday before we came in and set this finals route based on a list of the competitors — tried to determine how difficult the climbs need to be based on those names. And then on Tuesday we took the finals route down, and set all the other rounds for the competition. On Saturday afternoon once the semi round is over, we take down the semifinals and put the finals that we set on Monday back on the wall. We try to make changes based on performances throughout the week and hope that our decisions were good ones. 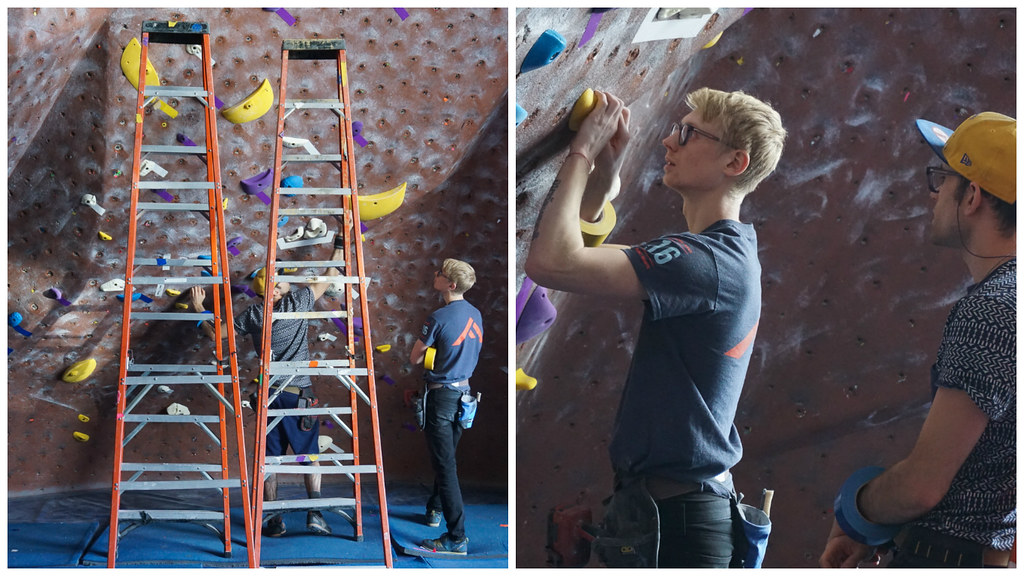 PG: What kind of objectives do you have on each route for the climber? What about the audience?

Bret: The objective for the competition is to provide fair and exciting climbs that separate the field of competitors to produce one winner. It’s a really hard needle to thread; sometimes we get it sometimes we don’t.

For the audience, yeah, we try to make it look as nice as possible and have some type of theme usually. And then as far as the movement there’s infinite possibilities of route setting movement so we try to make the climb look and climb awesome so that the crowd is involved and not just watching somebody climb up a hard ladder.

Q. What’s the atmosphere and pressure like as a setter at the Nationals?

A. It’s unlike working for any other type of sporting event, because you’re trying to constantly predict what an individual is going to be doing and you don’t know if that person is having a good day, a bad day, if they’re tired… There is a lot of pressure to get it done right, and there’s also not very many of these jobs for National routesetters.  There’s only four competitions a year that you can apply for and there’s a very, very small group of people that get these events. So you want to perform well and you want to put on a great show for people and you want to be the best you can be. 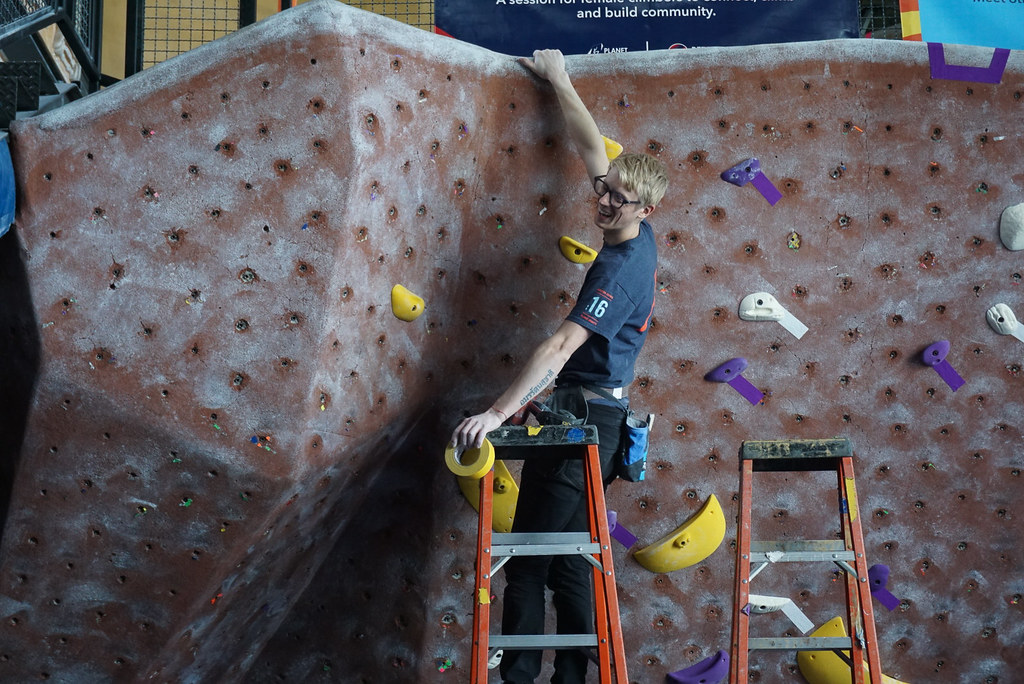 PG: From what it looks like, the crowd and competitors who participated, it looked like a successful and awesome championship. How do you feel about it from a setter’s perspective?

Bret: The routesetting crews for these events are always their worst critics. We focus heavily on minor details that a lot of people might not notice; there are a lot of things after every event we wish we would have done a lot better. But all in all, I thought it was a really great comp and a really great team victory. We had a crew of routesetters, held together by the Chief Routesetter Luke Bertelsen, and we were all very excited to be there and be part of the event.

PG: What’s the difference between setting at Planet Granite and setting at Nationals?

Bret: Well, first what’s awesome is that PG as a company is very excited to provide the opportunities for setters to leave their home gym and do these national events, and they feel that it’s a great learning opportunity. It’s a really well-received thing for PG setters to go do, which is really cool. Setting here at PG…we try to emphasize high quality in each route as we set multiple routes per day, and we have a very wide customer base that we want to satisfy with that.

At a competition, you have a lot more time to work on the finer details and you have a very narrow audience of climbers you have to appeal to. So in general, when setting at PG we focus on creating climbs for all ability level and styles, and at a competition we are only focusing on a small, elite group of climbers.

Thanks to Bret for taking the time to talk!

Here at Planet Granite we’re proud that many of our setters contribute routes at USAC events, which adds a new dimension to their skills and experience that benefits all of our members and guests.

To check out the 2016 Sport and Speed Climbing competition with Bret’s routes, click on the video below from USA Climbing’s Youtube channel.

Bret joins the announcers and discusses the routes for the men and women’s finals.

To enjoy Bret’s setting yourself,  just stop in to any Bay Area Planet Granite!