Six Days on El Cap – An Interview with Sam Elias

An Interview with Sam Elias by Walker Emerson

JUNE 25th 2014: Sam and Mike shiver on a small rock ledge two thousand feet above the ground. They huddle around a small single burner stove for warmth. Burning their precious fuel, they pray the storm breaks before they run out of supplies or freeze to death.

Sam racking up for their push to the summit. Photo by Jonathan Byers.

Mike checks the battery life on his phone – only 20%.  “We’re gonna have to call for a rescue if this storm keeps up.” he says. They are unprepared with only one rain jacket between them.

Only ten pitches stand between them and a free ascent of the route. Sam funnels the rain water with his jacket into a plastic bottle. “Well, at least we won’t go thirsty…” he groans. 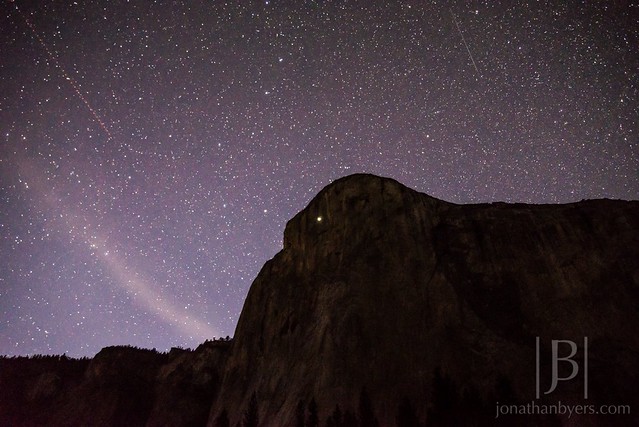 Sam and Mike alone on the wall after surviving a cold day in the rain. Photo by Jonathan Byers.

A blue rope smacks the ledge beside them and pierces the air with a loud CRACK. They look up expecting to see a Yosemite Search and Rescue team descending towards them, ready to pick them off the wall and end their crusade.

But to Sam and Mike’s surprise their friend Eliot Faber rappels towards them. “I’ve brought food and fuel!” he exclaims “How you guys doing?” “Much better now that you are here!” Sam says smiling.

They weathered the storm and after six days on El Capitan, Sam Elias and Mike Kerzhner made the 3rd free ascent of the long and difficult route called The PreMuir.

ABOUT SAM ELIAS: Thirty two years ago Sam was born near Detroit, Michigan. He began sport climbing in the Red River Gorge and soon found himself living and working at Miguel’s Pizza to fuel his new passion for climbing rocks.

Today, Sam is an extremely well rounded rock climber. From ice and mixed climbing, to traditional climbing and bouldering, (including a summit of Mount Everest in 2012!), Sam is a true rock and ice connoisseur. He presently works as an ambassador for The North Face, Scarpa and Black Diamond.

As a friend of Sam’s, I am truly inspired by his accomplishments and wanted to learn more about his experiences. 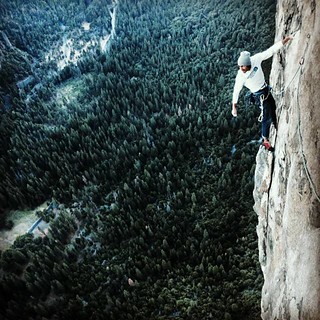 Sam takes in the exposure after sending the crux pitch. Photo by Mike Kerzhner.

Q – What made you want to climb El Cap?

Curiosity, the desire to try something new, and the affinity to connect with climbing history.

Q – The PreMuir is one of the hardest free routes on El Cap. With only two prior ascents!

Why did you choose this route for your first big wall experience?

My friends (you and Mike Kerzhner) were working on it, and said it was awesome. I honestly didn’t really know what I was getting into and didn’t really think so much about a full ascent. I was happy just climbing some pitches on the Captain.

It slowly progressed into thinking about a real push and ultimately came down to a hail mary because the summer was getting along and Yosemite was getting hot.

Q – What was your approach for sending the PreMuir?

We planned for 3 days of climbing followed by a rest day, and then 2-4 more days of climbing. We also came up with a plan to avoid using a portaledge. We woke everyday between 3-4 am, and were climbing by first light to avoid climbing in the sun as much as possible.

In the end we had climbed for 3 days, rested a day, and climbed out in 2 days. After spending a night on top of El Cap we then rappelled the whole route.

Q – What’s the next El Cap project for you?

Maybe the Salathe? I don’t know. There’s so much for me to do.

Q – What did you do to train for the PreMuir?

I mostly just climbed on it for the better part of 2 months. Though I did take a few rest periods from the valley in San Francisco and also went home to Salt Lake City. I gym climbed at those times to keep my climbing endurance up and maintain my finger and upper body strength.

Q – Had you and Mike Kerzhner climbed together before you teamed up to send the Premuir?

I’ve known Mike since 2005 in the Red River Gorge. I moved there to chill out after college and climb. His family was living in Ohio and he was visiting the Red like every weekend. He and his brother Greg were in high school then, and we were around each other a lot. 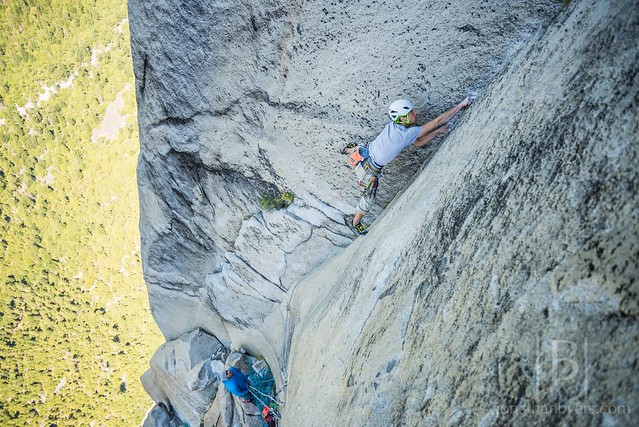 Mike high on the wall pushing for the top. Photo by Jonathan Byers.

It’s pretty cool that I’ve known them for this long and literally watched them both grow up. They are really talented guys – physically and intellectually.

The PreMuir was the first time Mike and I had connected and climbed together since the Red, though we’ve been aware of each others whereabouts over the years through mutual friends. 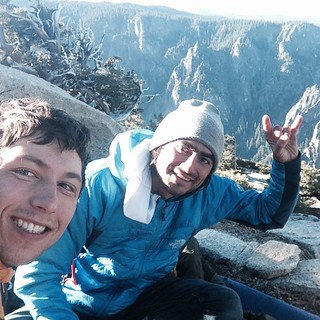 Sam and Mike on top of the PreMuir after their ascent. Photo by Mike Kerzhner.

It’s such a simple but difficult question. The PreMuir took everything I had. It required everything I knew of myself and of climbing, but it also forced me to learn other skills and adapt to new situations. I’m pretty damn proud of it!

Q – Favorite things to do when not climbing?

I like to enjoy the simple things of home and rest – coffee, cooking and food, good drinks, and friends. I like to run. I read and write sometimes. I like to think about art and tattoos. I like to do things with my hands.

Q – What makes you happy?

Balance, simplicity, imagination, creativity, physical exertion. Being outside, the wind and the smells, wide open landscapes. 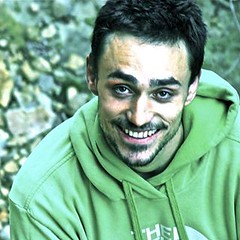