Summit For Someone – help raise money for Big City Mountaineers

North Face climber Cedar Wright, along with fellow climber and previous Planet Granite Setter Luis “Lucho” Rivera attempted (and succeeded!) in a First Ascent Climb of the Dragons Horns on Tioman Island!  On their second day , the first full day on the Island of Tioman, they made the first ascent of the previously unclimbed North Dragons Horn up a six pitch 5.10R route.  In the last week, they established a seven pitch 5.12- route on the South Dragons Horn on some of the best most featured granite they’ve ever climbed on. Their trip was to raise money and awareness for Big City Mountaineers (BCM).

Big City Mountaineers is a week long wilderness mentoring expedition for under-resourced teens that instill critical life skills and give teens the opportunity to experience the beauty and challenges of the wilderness along side supportive adult mentors.  BCM has programs in the San Francisco Bay Area , Denver, Seattle, Portland Minneapolis, and Chicago.  They offer week long wilderness expeditions, single day programs, and peer leadership programs.

Through the Summit for Someone program, Lucho and Cedar are able to raise thousands of dollars so that the BCM may continue to serve underprivileged teens throughout the country.

The North Face is also committed to supporting BCM kids and has pledged to match every dollar that they area able to raise up to $4,000. 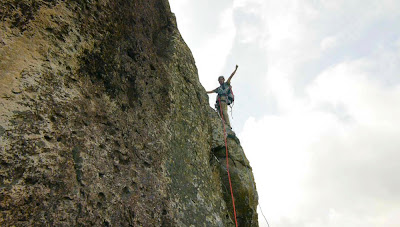 A note from Lucho about his experiences and why BCM is important to him:

For me personally it gives me an opportunity to give back to a similar program I attended while in high school that completely changed my life. Through a program like BCM I discovered rock climbing and a whole new world outside the city life in San Francisco’s Mission District in which I grew up in as a youth. I was exposed to something greater than what was going on in my neighborhood. My goal is reach out to similar youth who would otherwise never get this kind of opportunity.

Help support Lucho and Cedar on their journey!  More information and donations are accepted here.