It’s Saturday morning. 11:30 a.m.  Just before the Bloc Party 2015 bouldering competition begins in Sunnyvale.  Competitors survey the problems they’ll face. Some are stoic, intense, and pensive, while others are giddy with excitement.

Tran is scoping out Problem #45, the ultimate challenge of the competition, a series of widely spaced alabaster fins and bumps that would look right at home as armor on the back of a stegosaurus. 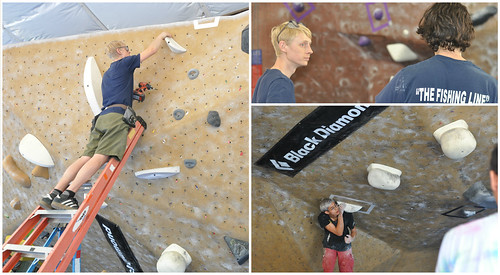 As emcee Travis Booher warms up the crowd with some banter, climbers set goals for the day.

“This is my first Bloc Party,” says Rachel Shelley-Abrahamson.  “I like the focus on individual movement in bouldering. To me it’s like mediation in motion. I come, chill, leave everything behind when I get on the wall.”

Abrahamson, who studies medicine, is nursing injuries and looks forward to a day of fun and meeting other boulderers.

“My goal is to beat these guys, of course!”  says Peter Nakamoto, pointing to his friends and shaking out his hands, which he says are twitching with excitement.

“I know I’m not going to beat Peter, so I want to beat Praneet. And get a shirt.” says Adrian Tzoned.

“I just want to get to the top.  Go big or go home!” Praneet Wadge says.

Dustin Wong, who traveled from San Francisco for the comp, has a different philosophy: “You gotta plan your day out. Mine’s very strategic.  It’s not about the climbing. It’s about the food.”

Booher counts off the competition and eager climbers congregate around the Wave and the Belly areas in the open-air rear bouldering area, and all throughout the front of the gym.

Eli Feasley has a secret weapon in her hands: her SFT Climbing custom shoes. They’re custom cut to her feet and are adjustable, with straps that regulate how aggressive the curve of the sole is.

“I’m a boulderer and a mechanical engineer,” Shumaker says, explaining the genesis of SFT.

The shoes are more affordable than other custom jobs. They ship in about a week and a half because they’re sourced locally from a laser cutter in Sebastopol before assembly in Sunnyvale.

In the outdoor patio by the slack-line, Jessica Chan, boulderer and designer for Beach Coffee serves climbers sample shots of the coconut-water-cold-brewed delicacy alongside Josh Horsley, the founder of the company, who, as it happens, also set problems for the comp.

PG member Andy Lamb swigs some Beach Coffee with friends and meanders towards the rear section where boulderers are confronting the crux of the competition, problems #44 and the alabaster dinosaur, #45.

“Nate’s the first person to get 44, I believe!” Booher’s voice tells the swollen crowd of boulderers who launch themselves repeatedly into the fray.

“Come on Tim! Get it Tim!” the crowd murmurs before Kang retreats for the moment.

Andy Lamb is next.  A chorus of hushed “Come on dude”’s usher him up the humps and spines until Lamb smoothly dispatches the last few moves to a cheer.

A big one down!  Lamb has a backlog of other work to do.  The crowd turns its eyes back to 44 and 45 as the river of challengers resumes its flow.

Before long it’s time for prizes.  First, free stuff!  A swelling crowd happily cries out, ripples, and heaves to snatch free swag from the air, rising to meet chalk bags and water bottles launched by the PG team.

The vibe is halfway between a school of sharks feeding on chum and hysterical crowds greeting the Beatles on the tarmac when they arrived in America in ‘64.

Then at last, after much sweat, blood, and chalk, the stars of Sunnyvale Bloc Party 2015’s are named:

Thanks to all the competitors who came out.  Next chance to compete at Bloc Party 2015 will be in Belmont on September 26.

A special thanks to the generous group of sponsors who donated prizes for Saturday’s competition:

Eliot Caroom, Planet Granite’s Content Marketing Manager, is an East Coast native and a veteran novice climber for the past decade, with stomping grounds of New York City gyms, boulders in Central Park, and the Gunks. He’s pumped to explore the climbing bounty of California, and to be spreading the good word about Planet Granite. Feel free to drop him a line.