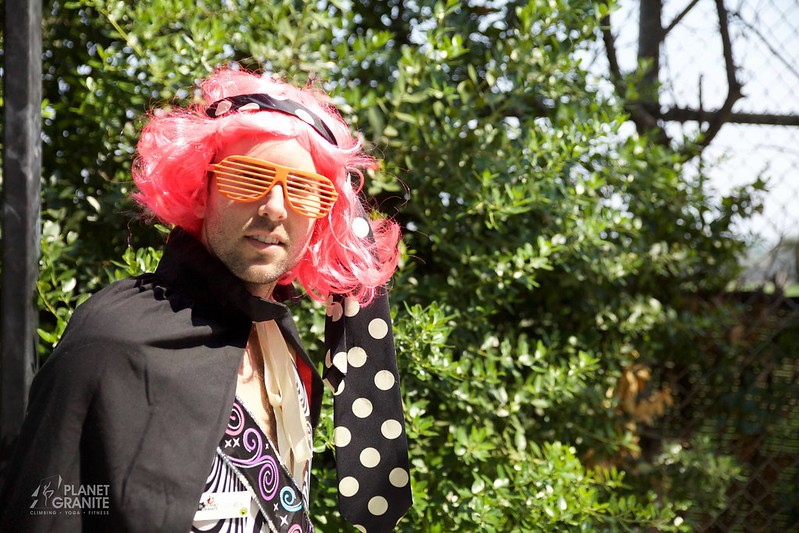 The morning of August 20th, 2016 was far from typical at Planet Granite Sunnyvale, as climbers prepared for Bloc Party, our annual bouldering competition.

A DJ was bumpin’ at the front desk as a crowd of climbers eagerly awaited action. Stranger things were also going on… WHO’S THE GUY IN THE PINK WIG?!

At high noon, climbers and spectators joined emcee Derek Hargis as he counted down the beginning of the comp. Then it was all a blur of excitement as the intensity of the climbers was put to work! Bloc Party 2016 had officially begun. 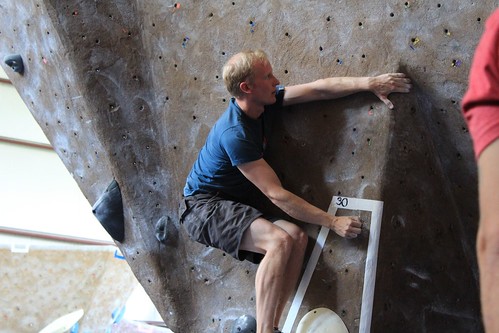 There’s a first for everything

“I’ve been climbing for about 15 years,” said Iiro. “But this is actually my first Bloc Party competition.”

Iiro, who moved from Finland to the U.S. for work, set high goals for himself for the day.

“I used to do climbing competitions in Finland. I think I want to aim to get in the Top 20 [of competitors] and complete at least one climb in the fourth category.” 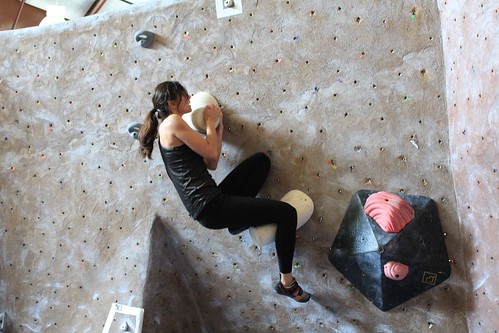 Justine joined competitors for her first Bloc Party, as well. She was unfortunate enough to miss out on last year’s competition, but was extremely grateful to be able to compete this year.

“Yeah, I cut my knee really bad right before Bloc Party last year,” Justine said. “I was really looking forward to doing this one this year!”

She has been climbing for a year and a half and climbs about two or three times a week. “I’m definitely not a strong person, but I am flexible! Whatever I do lack in strength, I can make up in flexibility. It’s something that definitely helps.” 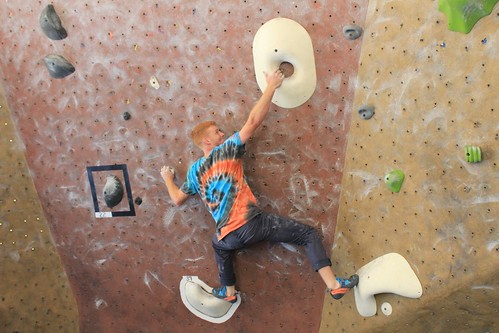 In the outdoor bouldering area, a crowd gathered around and cheered on climber Parker Burnell. Burnell was working on Problem #37 and with every fall, he was quick to jump back on to tackle it again.

“This is my fifth time trying this problem!” he exclaimed. Burnell, who has only been climbing for 11 months, shared his frustrations after attempting the route. “I think just finishing it is the hardest part. It just feels awkward.”

He studied the problem again and joked, “Well, you’re going to take a picture of me so I have to finish it now. “

And with his sixth and final attempt, he succeeded.

Tanya was not new to PG’s Bloc Party competition.

“This is my second Bloc Party here at the Sunnyvale location,” she said. “I have also gone to the Bloc Parties at the other locations.”

Climbing is all for fun for Tanya, but she loves surrounding herself in the competitive environment as well.

“I really wish there were actually more competitions,” she laughed. “I don’t really care about winning stuff, but the competition really pushes you and helps you understand your own abilities.”

To train, Tanya begins by warming up and climbing a grade that is easy for her. She continues to gradually increase the difficulty with each new problem until she has reached a one grade above what she usually climbs. Then she proceeds to decrease the difficulty. 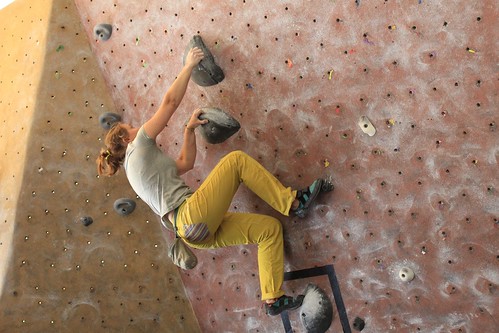 After a long day of fun and friendly competition, it was finally time for prizes and free stuff! Chalk, hats, and more were thrown out to the sea of climbers, anxious to see if they’ve won big prizes and to hear the names of winning competitors of Sunnyvale Bloc Party 2016.

And the winners are…

Come out to compete again in San Francisco on Sept. 17 and Sept. 25!

Thanks to our sponsors for your generosity!!