Tenacity in the Toolbox 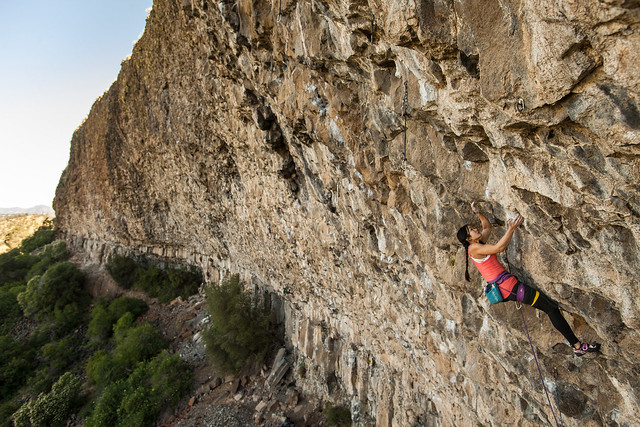 Stephanie on Burning Down the House. photo by Anthony Lapomardo, 33rdstreetmedia.com

Resting in a bomber, but core sapping and foot fatiguing, knee bar rest, I stared up at the last 20 feet of climbing. I was tired. I had made mistakes. My feet had cut where they shouldn’t have and my toes were numb from the cold. But, I had only one more bolt to clip, and the anchor was in sight. The only thing that stood between me and sendage was an incredibly long cross to a side pull. I would do it, I told myself. And then I fell.

Two months ago, I fell after the last bolt on a 110-foot sustained powerful climb, on the last hard move – a reach move that I had only climbed through once before. I was psyched (disappointed, yes, but psyched). A climb I had been working at Jailhouse for the last 4 months, suddenly seemed probable!

The afternoon I high pointed on my project, my husband and I headed to Smith Rocks, Oregon. We had planned a glorious 2-week vacation doing exactly what Jailhouse isn’t – thin technical climbing on near vert walls. Because I wanted to send, but because I also wasn’t crazy enough to spend the whole vacation at Jailhouse (though I considered it), we decided to spend the beginning and end weekends at Jailhouse, with the middle at Smith. Overly psyched on the climbing at Smith Rock, or maybe it was sheer stupidity, I climbed 9 of the 12 days, with only single rest days that were spaced too far apart. On our last day at Smith, as dusk fell on my 7th pitch of the day, I made a game time decision to throw for the finish hold on the climb I was trying. I latched the hold, but then my foot blew. I shock loaded my hand and fell. Fail. A project left for our next visit. But I needed to switch gears. We had 2 days to get back to California, to rest and recover, before I could get back on my project.

That evening the pain set in. 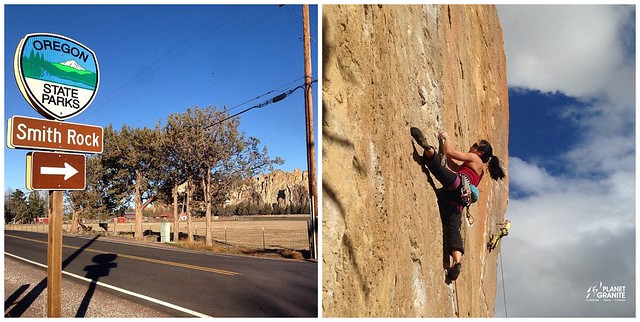 Stephanie warming up at Smith Rocks on the Morning Glory Wall.

I have a reoccurring shoulder injury. I could have had surgery, but I wasn’t willing to give up 7 months of climbing to address a problem that was not yet a problem. The surgery would fix my shoulder, but I only had inflammation, no tears. No tears? No problem. I opted to strengthen, endure months of PT, and hours of exercises with those red and green bands.

I first realized I had a shoulder “challenge” in 2007. On a drive back from Bishop, I grabbed money to hand over for a bridge toll. Halfway to the window, I couldn’t raise my arm any further. 7 months later, I was climbing for the first time and swore I would never do anything that would cause me to stop climbing. Injury was simply not worth it. I would climb within a limit, never chuck wildly or climb too many days to put myself at risk again. I love climbing too much, and being forced to stop doing it just. plain. sucked.

My shoulder would flare up from time to time, but I managed it. Then 3 years ago, I hurt it trying the moves on a route called Big House. My second time on the route, I struggled through a section and bam, I was out again. This time it was only for 4 months. I had stopped in time and not pushed through it. During rehab, I had set my goal to try that climb again. I needed to prove I could do it, that it hadn’t broken me. I trained and in 2013, I sent Big House, 5.14a, injury free.

After a leisurely drive down the Oregon coast we arrived at Jailhouse, sleepy and tired of sitting in our van. Because temps were going to be on the warm side, we woke up early and headed to the crag. It was a busy day, so I opted to top rope the warm-ups, so that someone could start leading the climb underneath me. While casually chatting and catching up, telling our friends about how fun Smith was, I fell on the first move of the climb – my shoulder wouldn’t hold my body weight.

Stunned, I focused – no way could my shoulder be that hurt. I struggled through the warm up, faulting having spent so much time on vertical terrain for my lack of core. “I just need to warm up slowly,” I thought, “I hate that warm-up – it’s never been easy.” Next, I tried a climb I can do in my sleep. I fell again. I don’t think I’ve fallen on that route in over 5 years.

Climbing through winter often means working a climb in fog, rain and cold.  While this wasn’t the wettest season, it still had its low points.

I decided to take a break. In spite of knowing I had better fitness after two weeks of climbing at Smith and that I had a better chance at sending my project that day, I also knew that if I didn’t send, choosing to climb today would likely cost me the rest of the season. I hiked out and spent the day icing my shoulder.

I took 2 weeks off, anxious to get back out there. But I couldn’t hold my body weight on a pull-up bar. How was I ever going to send? The season was ending; the forecast was showing temperatures in the upper 70s. Determined, I cautiously began to climb.

I had to rework beta on the route – moves that were hard had become impossible. My core felt weak, until I realized it’s because my shoulders wouldn’t hold my body into the wall. But, that last move – the move that had been my nemesis the entire season and where I had fallen just a month earlier – came together. I guess climbing in Smith had stretched me out a bit. 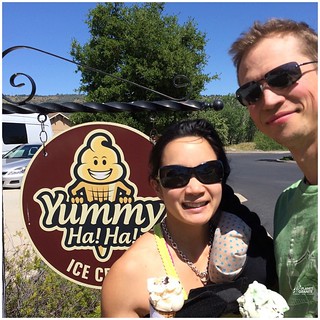 Icing the shoulder while enjoying our traditional “Sending Ice Cream”

Then I began to fall lower on the route. I low pointed. Repeatedly. I couldn’t get past the crux and I began to doubt I could send. With a weak shoulder, I couldn’t push it during the week, and I could feel my power decreasing. Mentally and physically exhausted, I couldn’t will my body to work. Sometimes I cried.

But each weekend, I forced myself to reset expectations. Reassess beta. Last weekend, I re-worked the bottom of the route, a section I hadn’t stopped to think about in months because I had it dialed. But every ounce of power saved would help me get to the top. I found new ways to grab holds and committed them to memory.

And then the forecast said 84. The CA summer, even though it’s spring, had arrived. Every bone in my body wanted to stay at home – to write it off and walk away. But the stubborn side of me couldn’t. I’d given up so much for this route – my best friend had given me a get out of jail card until I sent. I hadn’t seen her since January.

We woke up at 4:45am, hiked out at dawn and were done warming up before the sun had risen. I low pointed again. Frustrated, I waited just 30 minutes, and tried again. Everything came together. Moves felt easy, I was strong and moving fluidly. It would happen! And then…at the last bolt, my foot blew. Everything had been too easy and I hadn’t given that one foothold the attention it deserved.

Dejected and feeling the heat set in, I called it a day, staring at the even warmer temperature prediction for the next day.

Two tries in, I low pointed both times. I was frustrated, sad, angry, and ready to give up.  I had one more try, but I couldn’t muster the willpower to believe in it. I was tired from climbing the day before and from my two previous attempts that day. As I tied in for my third go on my second day of climbing, I steadied my breath and tried to will myself to believe this climb was possible. As I found myself in the same rest as two months ago, in the last knee bar, feeling the fatigue creep up my feet, and the pump not leaving my arms, I commanded my body, “Give it everything.” Clipping the anchor on this route was as much a surprise as it was a relief.

Burning Down the House, 5.14b, took me the better part of this season. I couldn’t do all the moves the first or even 10th time I tried it.  I couldn’t stop climbing even though I knew I was testing fate.  I guess tenacity is another word for stubborn. Maybe I am a bit stubborn. And now, it’s time to rest and rehab my shoulder for next season.

Watch an unedited video of Stephanie’s attempt 2 months ago – note to viewer, this is raw footage and it’s long. 🙂 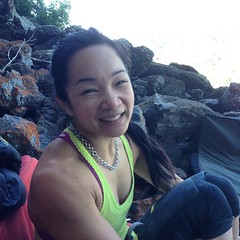 Stephanie Ko Pound is the Sr. Director of Bay Area & Marketing at Planet Granite. A committed weekend warrior, she spends nearly every weekend with her husband at Jailhouse. After swearing for weeks, she’d never project something this long again, the day she sent this climb, a friend texted her, “Way to go crusher! Add tenacity to your toolbox”. Less than a week later, with the months of miserable projecting forgotten, she’s already contemplating her next project.