Training For the Denali Traverse: A Trip Report 20 Years in the Making 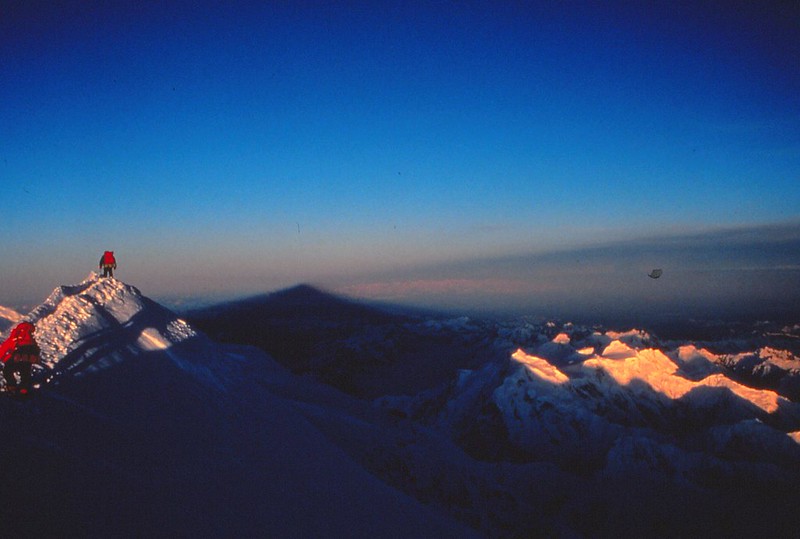 The shadow of Denali stretching across the landscape, in this shot courtesy of Gary

Gary Chambers is one of an elite group you can spot in Planet Granite’s gyms who have more experience than the average climber, and who measure it in decades. Gary still brings it in the gym, most recently going the distance and winning the Advanced category with climbing partner Mei during the 24-hour Battle For Bolts marathon.

His history with PG goes way back (if you climb cracks in Sunnyvale, you’ve likely wedged your toes into some of Gary’s handiwork).  For this post, Gary discussed a journey he made 20 years ago, in 1995: a challenging traverse of Denali which began with buckets of sweat shed at home and the original Planet Granite gym in Santa Clara. 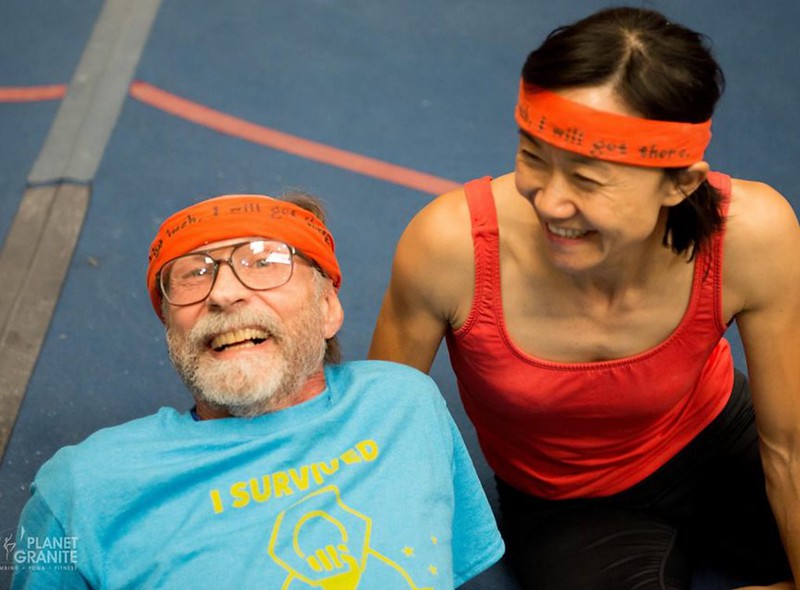 Gary at the recent Battle For Bolts event with Mei, his climbing partner for the event.

PG: What made you want to climb Denali?

Gary: I’d been wanting to climb Denali since I was kid. At that time when I was a little kid, about 12, 13 years old, that area of the country, that part of Alaska was relatively unexplored.  It had been first been summited not that long before.

I got into rock climbing because of backpacking.  I’d see places I couldn’t get to, and think, “It’d be cool to get to that place, what do I have to learn?”  Mountaineering, I got into for scenery, it’s really something when you’re doing a big mountain, it’s very beautiful.

I had a once in a lifetime chance to do this because I was very busy and had interlocking schedules with other people.  So while I was planning my on trip, I put a deposit down on this guided trip.

The group of fellow mountaineers on Gary’s trip. He is third from right, wearing sunglasses.

PG:  How did you find time to train for the trip?

Gary:  I did software work and investing and stay-at-home parenting while I was training.    My daughter was less than two when I went there. My wife would be home when I’d come to the gym and we’d have a babysitter the other day.

My wife Barb, daughter Mary, and I, all had whooping cough in the weeks before I left, so that made focusing a bit difficult, especially since my daughter was only one year old at the time.

I realized early on that the ideal piece of equipment for this aside from a pull up bar would a stepper.  I had to go through about three steppers, I broke them all until I got to a semi-professional stepper like you’d have in a gym.  I’d workout for a while, do pull-ups until I had 100 done in various sets, then I’d come in and do the stepper for four  hours.  Have cookies and drinks laid out.  I’d try to keep my pulse at 170 in all that time.

When doing my pre-Denali workouts on my 4-hour stepper sessions, I was wearing weighted boots, eight pounds each.

Then I’d put on a pack 70 pounds and I’d do pull-ups in sets, until I could only do 1 pull-up with the 70 pounds.  I’d do that once a week, I’d go the climbing gym once a week, and I’d typically stay there for four or five hours.  Once a month I’d climb for 12 hours, line up a bunch of partners and climb for 12 hours. That was at the original Planet Granite in Santa Clara, in 1995.

I thought if I was going to go on a guided trip, I thought I wanted to do something unusual.

What we did was a traverse of Denali and it’s one of the harder things you can do for physical efforts.  It’s not real technical, but you use crampons and ice axes.

PG: How’d you get there in the first place?

When you’re flying through the pass, the smallest part is half a mile or something.  When you’re going through there it seems pretty small. To get to basecamp, which is 7,000 feet you have to fly.

Gary: The oxygen pressure is like a 23,000-foot mountain in the Himalayas, because the Earth’s atmosphere swells up around the equator.  The closer you get to the poles, the thinner the atmosphere is.

Building a camp in a place like that is very involved.  First you have to probe for crevasses.  Then you have to stomp out a place and carve out the snow.  Quarry it (by carving out snow and creating a void, like a rock quarry), and build a wall that’s three or four feet tall.

We were camping at 17,500 feet for a few days waiting for weather to summit.   They rescued people from up higher, and dragged them down.  The helicopter for the rescue landed right near our camp. 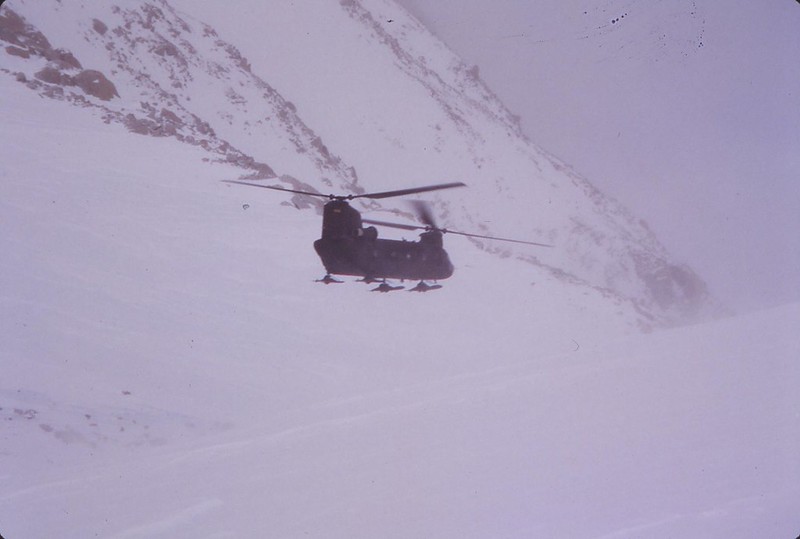 Alex Lowe got on the plane with us to fly out.  He was up there trying to make a speed record from base camp and back.  I think he assisted with this rescue, as did all of our guys.

Gary: You have to watch out for crevasses.  We all fell into them, (at one time or another).  We always got stuck by our packs or something, we never went all the way in.

I got into a crevasse up to my waist.  You can get out of there if you’re careful.  You can wiggle your feet around (beneath you) because it’s hollow, and that’s a bit unnerving.

PG: How did you feel about the risks involved with your trip, as a husband and father?

Gary: I tended to be fairly conservative while I was training for the trip and during the trip.  On the other hand you have to understand, it’s a possibility.  People died while I was up there.

I came close to dying on Mt. Shasta once on a training trip with a buddy of mine.  We went in April. There was a really bad storm, much worse than we thought we’d run into. This was on Casaval Ridge, about 10,000 feet.  My partner shakes me awake, and I look up at him and he’s hollering, and I took my earplugs out, and I still couldn’t hear him.  I look up and the tent is starting to cave in, and I’m pushing back. 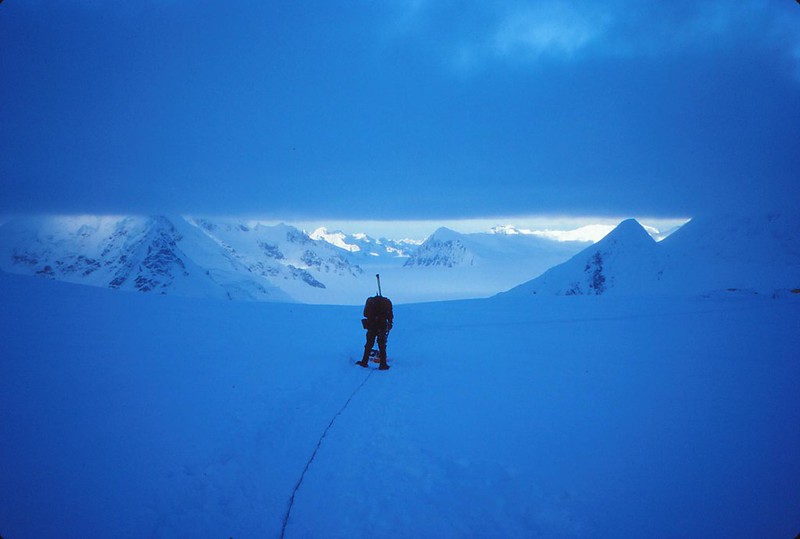 I crawled out, and the tent collapsed right behind me.  When we got out we had to spend the whole day building a snow cave.  When we first got out, we had to stand in a hole so we could dig more. We found out later, the winds were over 100 miles per hour.

We had to crawl around finding shovels and kneel down to dig around and make a hole to dig some more. It was a frightening experience. You can run into a situation almost anywhere. 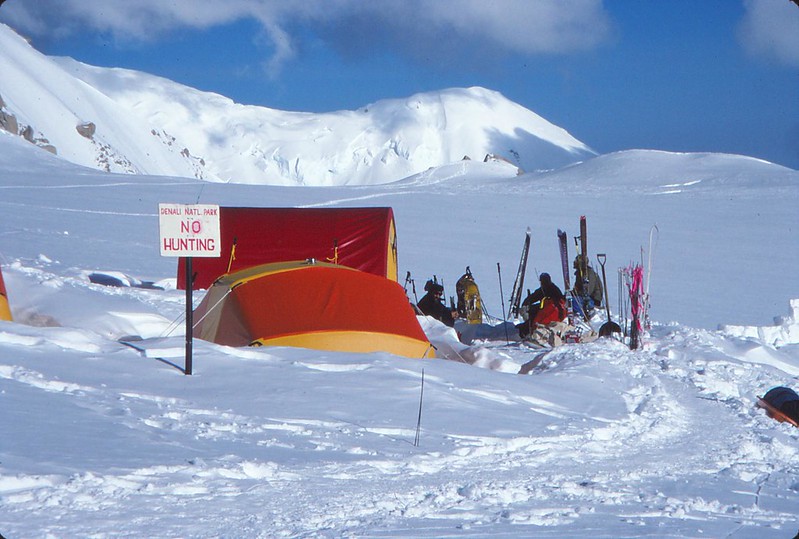 PG: What was the summit attempt like on your Denali trip?

Gary: We were moving for 40 hours that day and it was our last day to summit it, it was a close thing.  When you do a traverse, usually the traverse is what you’re interested in. The summit for us was a bonus.

I got lucky and was on the summit when Scott turned and took a picture of me which he had, and still might have, on a card on sale in Talkeetna.

While on the summit there was a loud crack, and slight shudder, that I, being from California, was able to identify as an earthquake. The others were sceptical, but when Scott looked it up later, sure enough, as unusual as it was, there was an earthquake.

We summited at dawn and sunset, which was less than an hour apart at that time. We headed up towards the summit on the shortest day of the year. As we got up on the summit ridge, the sun dipped below the horizon, and as we approached, the sun came back up. The shadow of Denali stretched off all those other mountains. 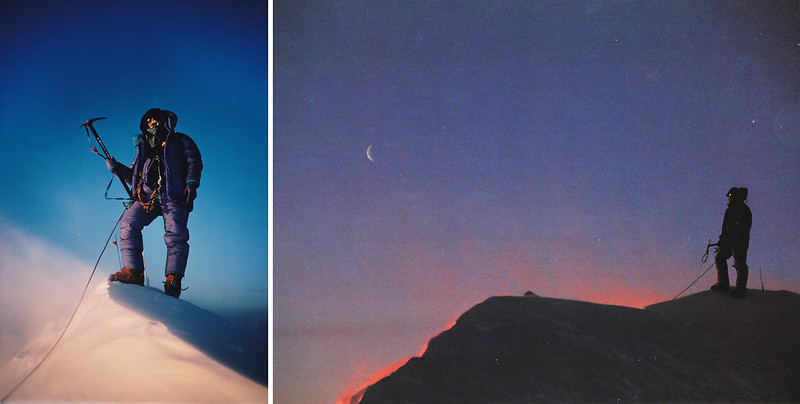 PG:  What is your advice to climbers considering a big project?

Gary: To be successful, you have to find a balance between not giving up, being perseverant, and also being wiling to improvise and change how you’re doing some things.  Perseverance is better than stubbornness, although stubbornness will take you a long way too sometimes.

You can’t let other people define your goals for you.  If you want to achieve an important goal, you have to have some passion about it and approach it methodically, at least I have to, so I could figure out the intermediate steps.  So I climbed Mt. Shasta, and some other things.

When you take on a goal like Denali or doing a big wall climb or something like that, you should have some self examination occasionally, because these things are dangerous and you have to think of all the possibilities and how it will affect everyone you know, both success and not success. 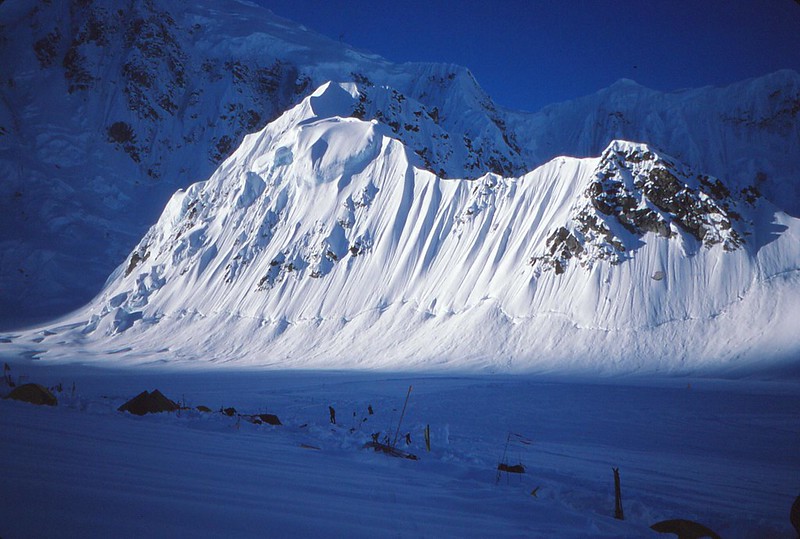 There’s lots of things you can do to help yourself reach your goals: You can put reminders everywhere you look around the house, put up pictures of your goal, put up notes about your intermediate goals over your alarm clock.  You need to remind yourself so you’re focused.

I’d like to thank Brian Okonek here, and Alaska Denali Guiding Inc.  There’s only one other thing I’ve ever done that’s given me more satisfaction than this, and that’s hiking the PCT with my family, my wife and my daughter, when she was 10.

Rock climbing is dangerous and there is inherent risk in all forms of this sport.  The comments in this blog do not necessarily represent the thoughts or ideas of Planet Granite.  The information provided is one person’s opinion of how this climbing trip worked for them; treat it as such.  The information provided may contain mistakes therefore we do not guarantee the accuracy of the information provided; it may be incorrect or misleading.  This is not a substitute for a professional climbing instructor or mountaineering guide.  This is not an instructional post; do not use it as one.   If you have any doubts about your ability to make this trip or try these climbs, do not try it.  You must use your own judgment when choosing, approaching, climbing or descending from any route, and please seek a professional guide for instruction or information.