For almost a decade now, climbers and Yosemite National Park staff have joined forces for one of the most unique public-service events held worldwide – The Yosemite Facelift.

For one week in September, the park provides programming, prime camping spots, and more in exchange for climbers help in picking up trash after the busy tourist season. And it’s been wildly successful!

Over the course of several days the team set out with different partners to clean up areas that would cause John Muir to roll over in his grave.

*Want to join in the fun?

More Pics from the trip: 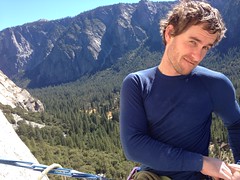 Written by Eliot, Manager of PG San Francisco – A native of Sonoma, Eliot’s dad introduced him to camping, backpacking and mountaineering at an early age. After taking a rock-climbing course in Leavenworth, Washington, he immediately became hooked. While studying the last few years at UC San Diego, Eliot made the granite laden foothills of Mt. Woodson a home away from home. He’s always looking for enthusiastic climbers to share a rope or crash pad.