If you’ve climbed at a Planet Granite gym before, you’ve likely had the pleasure of climbing on a route set by ‘MZ‘ also known as Max Zolotukhin.

Max’s attention to detail and passion for unique and creative movement loudly comes through in each of the boulder problems and routes that bear his initials.

When he agreed to write a piece for the Planet Granite blog, we jumped at the opportunity!  It’s not often we get the chance to hear the inner thoughts and perspective of a nationally-ranked routesetter.

In this recap Max shares details of his experience setting at the American Bouldering Series 15 National Championships in Colorado Springs, CO.  Enjoy!

I’m a huge sports fan. This usually surprises people that know me from my place in the climbing community. To most climbers, the world of main stream sports fandom and climbing culture are mutually exclusive.

After all, professional sports are what much of society uses to distract themselves from the monotony of their daily lives. Rock climbers, they have climbing to do that for them! 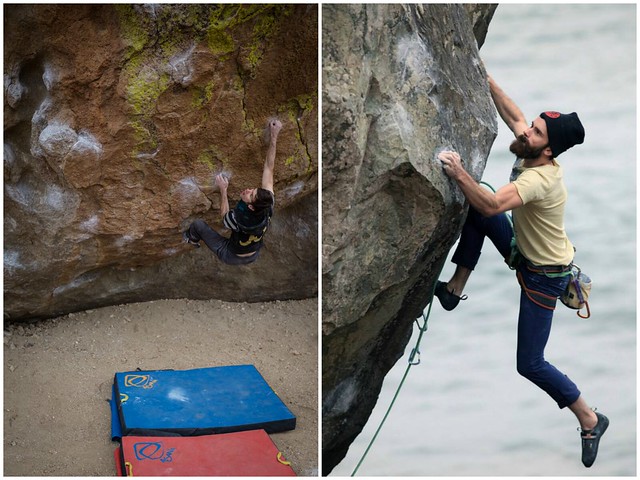 My love of pro sports stems from an admiration for athletes testing themselves against one another on the highest platform of competition. Sports have always been a perfect allegory for the struggle of human existence. Pretty deep, huh? The same can be said for climbing. It is perhaps the most basic of human instincts; the desire to ascend, to summit, to conquer.

These two passions of mine culminated a few weeks ago in the greatest sporting event that I’ve ever attended in person, one that I had the very special privilege of helping to organize.

Ever since I began to climb, set routes, and compete, the American Bouldering Series Adult Nationals have been the holy grail of climbing competitions on US soil. Every year in mid-February, the country’s strongest boulderers get together to compete for thousands of dollars, determine the US champion, and select the US Bouldering Team who are then eligible to represent the United States in World Cups. 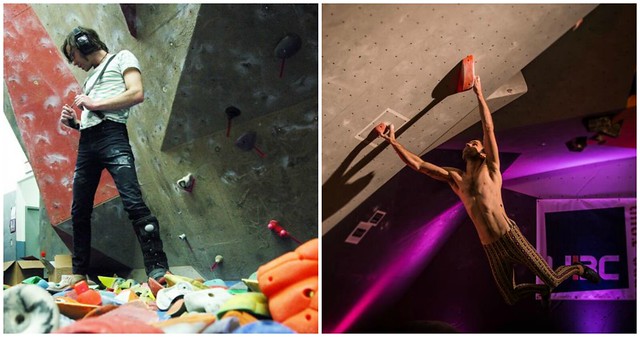 In my heyday of competing, I made finals (top 20 at the time) three times, finishing 19th, 18th, and 16th in 2006, 2007, and 2009. I also competed in 2010 with my leg in a walking boot after a broken ankle months earlier and still managed to beat over a dozen people. While climbing in this event was always exceptionally fun, my true desire lay in wanting to help organize it.

PG Setting team rallying at the boulders. | Max having a ‘honnold’ moment at PG Belmont.

I would often hang out with the route setters during the comp, commiserating over which problems worked out and which didn’t. Perhaps it’s the same reason I much prefer to be watching basketball to actually playing it; if you can’t be the best at something, it’s much more fun to root for those who are the best and to be entertained as much as possible.

After three years of sitting at home and watching the event online, I finally got my shot this year at being on the most sought after setting crew of the year. The fraternity of high level competition setting is very tight knit and I was thrilled to be working the event with four other setters who I know well and have immense respect for.

The name of the game in route setting has always been anonymity. Setters prefer to hang back in the shadows and hate to take credit for a seamless event. On the other hand, competitors and spectators alike are often quick to blame route setters when a comp turns out less than ideally.

Well, this year our crew got to give each other a well-deserved pat on the back. I’ve never been a part of an event where the work week ran as smooth as this one or where the final result was as perfectly divided and insanely entertaining to boot.

Setters often say that luck plays a major role in what happens at any competition. This is true to certain degree, after all you cannot plan for a competitor’s foot slipping on the last move of the final problem, robbing the crowd of the fist-pumping crescendo that everyone craves. But, luck is also often a product of skill.

One of the best parts of setting for this event was the tweaking process between rounds, and really feeling like we were completely in touch with the difficulty of the problems with respect to the field of competitors.  Many a time holds were turned or swapped out for better or worse ones, and nearly every time the right call was made with regards to the increased or decreased difficulty of the boulder.

In the end, Daniel Woods proved why he has been the dominant force in US climbing for 10 years by topping all four finals boulders and winning his 8th national title, while Alex Puccio was dethroned by the German World Cup champion Juliane Wurm, with three rookie teenagers hot on their heels.  *Men’s Highlights HERE      |    *Women’s Highlights HERE

This event was definitely a victory lap for all of us on the organizational end and the challenge from here on out will be to replicate this success for years and events to come. I’d like to think that a large part of this success came from the certification system that USA Climbing created to cultivate route setting in our country. 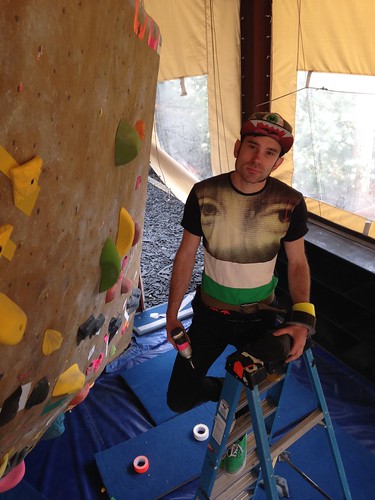 Just a kid from a tiny climbing gym in Florida…

For many years, competitions such as this were seen as an ‘old boys’ club for setters, impenetrable by those capable of turning a wrench but lacking in the hyper-networking skills necessary for pushing your way onto the scene.

This welcome change has created a meritocracy where hard work and due diligence have created opportunities for kids such as myself who grew up climbing in a tiny gym in Florida to be a part of climbing history.

Here’s to a great event!

And to many more; hoping that others such as myself see the same opportunities and grab them by the throat. Cheers!

ABOUT MAX – Max grew up on Gainesville FL, where he set a route the first day he ever climbed in the summer of 2000. Since then, he has devoted his life to crafting thought provoking movement in gyms and at competitions across the country. Having 14 years of high profile setting and competing under his belt, Max considers his greatest plastic successes to be making the US Bouldering Team in 2009, setting for multiple Youth Sports Climbing National Championships, and recently setting for the 2014 Adult Bouldering National Championships. On rock, Max has bouldered V14, clipped up 5.14, and is probably best know for once foolishly trying to boulder a sport route…whoops! Aside from climbing, he enjoys watching and playing basketball, drinking craft beer, street fasion, and occasionally writing. Like a fine wine or an aged whiskey, Max’s routes require a refined palate to enjoy properly.  🙂