Planet Granite prides itself on the PG Gives Back Program. You might remember when you signed up for membership, you were asked to choose a category for us to donate to in your name: Climbing, Community, or Environment.

With support from the PG Gives Back Program and additional sponsors, the Yosemite Climber Stewards (along with the Climbing Trails Program) have worked on trail restoration projects including the trails at El Cap, East Ledges Descent, Royal Arches, Pat & Jacks, Cathedral Peak, Fairview Dome, DAFF Dome, Medlicott Dome and more!

In this guest post, John Connor from the Yosemite Climber Stewards introduces the mission of this all-volunteer non-profit organization, as well as shares his experience cleaning up El Cap in a 2012 Nosewipe event.

Read on to hear your PG membership in action!

As I rappel over the edge of El Capitan, 3,000 feet of exposure instantaneously confronts my senses: heart-pounding, eye-popping exposure. I descend the fixed line slowly, spinning in space, staring alternately at my gri-gri, prusik backup, the anchors as I pass them. Checking and re-checking my rigging, there is no choice but to breathe deeply and focus on the safety chain that we have built. Rappelling is a simple task for a competent rock climber, one I’ve done many times. However, this is my first time on El Cap and as I spin uncontrollably in circles, it seems as if the exposure itself will somehow vaporize my rappel device, my harness, my mind… 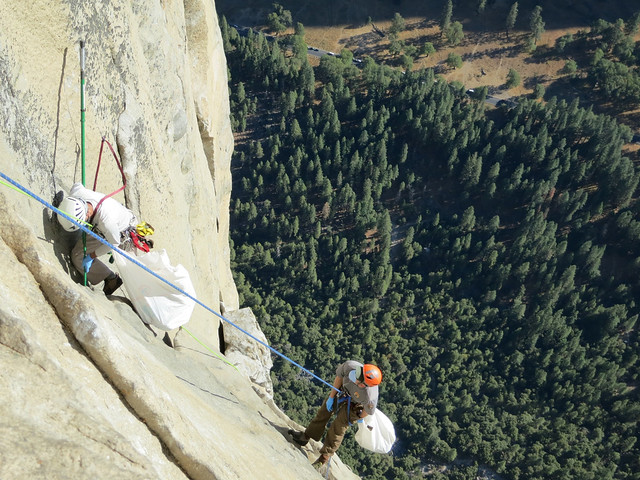 That day, one of many I look back on from the Autumn of 2012, myself, National Park Service Climbing Ranger Ben Doyle, and fellow volunteer Dave Campbell, rapped 600 feet down The Nose of El Capitan. A semi-annual event dubbed the Nosewipe, this cleanup attempts to stem the tide of human waste on one of the most famous and popular rock climbs in the world. Our goal is to remove trash from, and restore, a triangular shaped ledge called Camp VI. The ledge, a less-than-ideal bivouac site bordered on two sides by 5-7-inch-wide cracks, offers a near-perfect natural latrine and garbage depot, one that climbers have historically, and unfortunately repeatedly, made use of. This is Ben’s job. And mine: I volunteer, along with other climbers, as part of an NPS-managed crew known as the Yosemite Climber Stewards, whose mission is to preserve climbing in Yosemite. 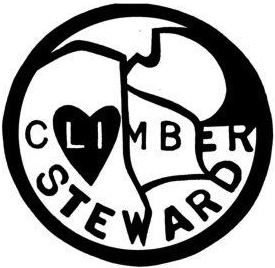 The all-volunteer Stewards receive grant funding from a few key organizations, such as Planet Granite, in order to perform cleanups, as well as other work including trail maintenance, patrols of popular climbing routes, instruction for climbers on proper food storage, and many other important tasks.

Stewards serve as volunteer interns, receiving basic support in the form of a campsite, reimbursements for food, and the opportunity to live, work, and climb in what is perhaps the world’s most popular climbing area. In exchange, the Stewards work 40 hour weeks, assisting NPS Climbing Rangers.

The brainchild of Ranger Ben Doyle, the Steward program began in 2012. It runs from May through October each season in Yosemite, effectively tripling the personnel helping to manage climbing in this busy park during its high season. This Autumn, the Stewards will migrate south for the winter, to another busy, historic, destination climbing area, Joshua Tree National Park. 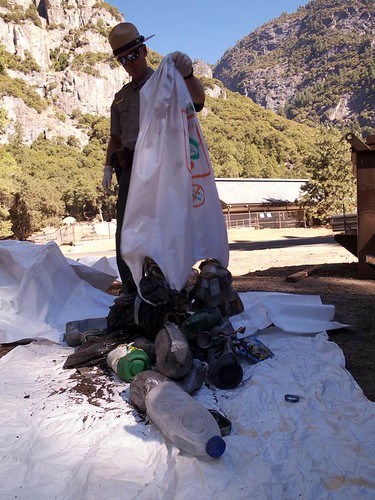 Climbing Ranger Jesse McGahey dumping out a bag of refuse from the event. Photo by Cheyne Lempe.

Planet Granite, through its PG Gives Back program, has provided the initial seed funding for this 1st year in Joshua Tree!

And we aim to put it to good use performing cleanups, assisting with re-vegetation efforts of sensitive desert plants in burned or impacted areas, volunteering with JOSAR, and so on.

Climbing continues to grow in popularity, especially in cities with newer, modern gym facilities. But outdoor climbing grows at a much slower rate. With more climbers comes additional impact to often fragile ecosystems.

For this reason, partnerships between public and private organizations, such as the National Park Service and Planet Granite, have become increasingly important, not just in popular climbing areas, but at many crags and boulderfields throughout the country.

Back on El Cap in 2012, we filled two Grade VI haulbags to the brim and began rigging for the long, bicep-inflaming, jug-haul back to the top. En route, we witnessed a sunset like no other, bands of color slowly receding on the skyline as we moved ever upwards. As a schoolroom for steep jugging, the upper 600 feet of the Nose has no equal…

At the end of the overhangs, towards the top, I cast one last look downwards at where we’ve been. The tiny white blooms of headlamps begin to show in the gloaming as other teams take advantage of the early October temps to engage in their own adventures. I hope that they care for the stone the way they do for their partners and themselves. The more that climbers on their own can continue the tradition of clean climbing, the better the climbing will be for all of us.

“$1 per Member per Month” is our pledge to donate funding to local non-profit organizations who are out there doing great things in our community, from preserving climbing access to working with under-served youth.